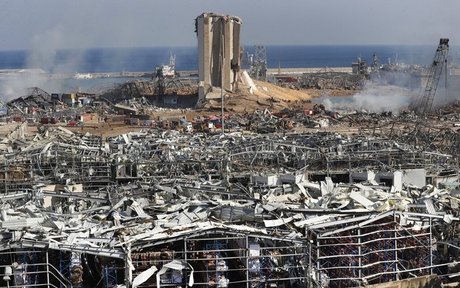 Lebanon requested international arrest warrants for the owner and captain of a vessel that contained a shipment of fertiliser behind Beirut's massive port blast, a judicial source said.

The explosion of hundreds of tonnes of ammonium nitrate on August 4 killed more than 190 people, wounded thousands and ravaged large parts of the capital.

The Rhosus, a Moldovan-flagged cargo ship sailing from Georgia and bound for Mozambique, is widely understood to have brought the fertiliser to Beirut in 2013.

The judge leading Lebanon's probe into the case, Fadi Sawan, "issued two absentee arrest warrants for the owner of the Rhosus... as well as the ship's captain," the judicial source said Thursday.

The ship's captain has been widely named as Boris Prokoshev, a Russian national.

Cypriot police in August questioned Igor Grechushkin, a Russian national initially described as the owner of the ship, but an investigation by the Organized Crime and Corruption Reporting Project named the ultimate owner as Charalambos Manoli, a Cypriot shipping magnate -- a claim denied by Manoli.

The judge passed names "on to the public prosecution, who referred them on to Interpol and asked it to issue an international notice for their arrests," the judicial source said.

The call came after a Lebanese judicial and security delegation last month visited Cyprus to question the ship owner at his residence, the source added.

After it arrived in Lebanon, the Rhosus faced "technical problems", and security officials said it was impounded after a Lebanese company filed a lawsuit against its owner.

Port authorities unloaded the ammonium nitrate and stored it in a run down port warehouse with cracks in its walls, the officials said.

The Rhosus sank in Beirut port several years after it arrived.

Lebanon has rejected an international investigation into the country's worst peace-time disaster, but its probe is being aided by foreign experts, including from the FBI and France.

It has so far arrested 25 people as part of the ongoing probe, including top port and customs officials.

Sure the Captain of the ship was responsible for the explosion:)