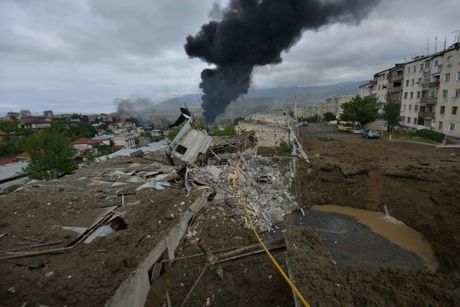 Fighting between Armenian and Azerbaijani forces over the disputed Nagorno-Karabakh region spilled over into Thursday, with fresh shelling in the province's capital ahead of a first meeting of international mediators in Geneva.

Azerbaijan's Foreign Minister Jeyhun Bayramov was to meet diplomats from France, Russia and the United States, who make up the "Minsk Group" that has sought a solution to the Karabakh conflict since the 1990s.

Armenia's foreign minister will not be attending, after Yerevan ruled out talks between the two countries' top diplomats as long as clashes are ongoing. Zohrab Mnatsakanyan will instead meet his Russian counterpart in Moscow on Monday.

Heavy bombardments have levelled many homes since fighting erupted late last month and Stepanakert is pockmarked with unexploded ordinance and wide craters from shelling.

Defence officials in Azerbaijan and Armenia said fighting continued into Thursday, with both sides claiming to have inflicted heavy losses and accusing the other of shelling civilian areas.

Alongside the new bombardments in Stepanakert, Azerbaijan said Armenian shelling on several villages near the frontline had left people dead and wounded.

Armenia's rights ombudsman Artak Beglaryan told AFP on Wednesday that the renewed fighting has displaced around half of Karabakh's 140,000 residents and forced some 90 percent of its women and children from their homes.

The fighting in one of the most combustible frozen conflicts resulting from the fall of the Soviet Union erupted on September 27, with Azerbaijan insisting the region must return to its control.

Nagorno-Karabakh broke away from Azerbaijan in a 1990s war that claimed the lives of some 30,000 people. The Armenian separatists declared independence, but no countries recognise its autonomy and it is still acknowledged by world leaders as part of Azerbaijan.

Dozens of civilians have been confirmed killed in the fighting and the Armenian side has acknowledged more than 300 military deaths. Azerbaijan has not admitted to any fatalities among its troops.

Officials in Baku said Wednesday 427 dwellings populated by roughly 1,200 people had been destroyed.

International leaders have called for an immediate halt to the fighting and President Vladimir Putin Wednesday described the flare-up as a "tragedy", calling for a ceasefire "as quickly as possible".

But there are no signs yet of the conflict abating and Turkey's strong backing for Azerbaijan has sown fears in the West that the conflict could spiral into a full-blown war embroiling Ankara with Moscow, which has a military treaty with Armenia.

Putin and French leader Emmanuel Macron are among world leaders to denounce the reported deployment of pro-Ankara fighters from Syria and Libya to Karabakh. and Iran on Wednesday warned of "terrorists" who had joined the conflict from abroad.

Yerevan is in a military alliance of former-Soviet countries led by Moscow and any escalation of fighting over Karabakh that spills over into Armenia could risk triggering a Russian intervention.

But Moscow has shown little appetite for any escalation and Putin on Wednesday noted the fighting was persisting in Karabakh, not in Armenia itself.