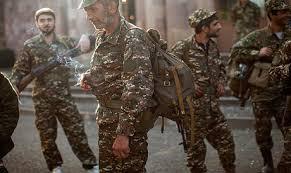 Armenia and Azerbaijan were moving "towards a truce" to end fighting over Nagorno-Karabakh, the French presidency told AFP, with a deal expected late Friday or on Saturday.

Senior diplomats from the warring parties were meeting in Moscow even as clashes over the disputed region showed no sign of abating.

"We are moving towards a truce tonight or tomorrow but it's still fragile," President Emmanuel Macron's office said in a statement to AFP.

The French presidency said the talks were part of a "coordinated process" with Russian President Vladimir Putin since the start of the week.

A resumption of peace talks would be negotiated over the coming days in the framework of the so-called Minsk group, which spearheads efforts by the Organization for Security and Co-operation in Europe (OSCE) to bring an end to the long-running Karabakh conflict.

France chairs the group jointly with Russia and the United States.

The foreign ministers of Armenia and Azerbaijan are expected in Moscow on Friday at Putin's invitation.