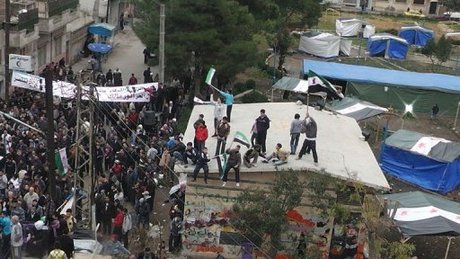 At least 22 civilians, five regime troops and an army deserter were killed in fresh violence across Syria on Monday, activists and a rights group said, also reporting a string of clashes between deserters and the army.

The Local Coordination Committees, the main activist group spurring protests on the ground, said security forces killed 23 people -- "including two children, a rebel soldier and two who died under torture."

Three others were gunned down in the flashpoint central town of Homs, said the Britain-based watchdog in statements received by Agence France Presse, adding that two civilians were killed in Hama, also central Syria, and Aleppo in the north.

The Observatory said two people died in crossfire between security agents and deserters in Daraa.

In Homs province, "five soldiers of Syria's regular army were killed and 13 others wounded in fighting with a group of deserters at a checkpoint in the village of al-Ziraa," it said.

The group said the two sides also clashed in Idlib on the Damascus-Aleppo highway, near Maaret al-Numan, where eight soldiers were reported killed or injured, and three armored cars destroyed.

Also on Monday, the Observatory said funerals in Douma near the Syrian capital drew more than 150,000 people, marking the largest expression of mourning in the protest hub since a pro-democracy uprising began in March.

The processions accompanied the bodies of 12 people killed in the past three days, including three who died in detention, and gathered the "largest number of mourners in Douma since the start of the uprising," the human rights group said.

Mourners chanted slogans in support of the Free Syrian Army, a group of defectors whose leadership is based in Turkey, according to a video posted on YouTube, one of the main channel's used by local activists to report on events.

Activists say that forces loyal to the regime of President Bashar al-Assad are only deployed at the entrances of this rebellious town, located just 20 kilometers from the capital.

The funerals come after Syrian army deserters at the weekend seized control of Douma after fierce fighting, before withdrawing again to their bases, according to the same source.

The clashes erupted on Saturday night after security forces killed four civilians when they fired on mourners at a funeral, the Observatory reported at the time.

Damascus on Monday rejected an Arab League plan for President Bashar al-Assad to transfer power to his deputy, following 10 months of anti-regime protests that have cost thousands of lives in a crackdown by security forces.

The Syrian army is not trained to combat groups that fight back. Only at unarmed civilians in Lebanon and Syria

Arabs should spend some more money trying to buy Syrian officers to switch sides.
That is the quickest and safest way and it will save many more deads and accelerate to ineluctable downfall of Assad

Well said Shab. The Assad forces can not fight a sustained guerilla type war against a very determined foe. The signs of weakness are spreading from humus to dar3a. What happened in zabadani is a clear indication of where things are heading. If the western powers establish safe zones like they did in kosovo and start arming the rebels the regime would fall come this summer. I think the regime will relocate to latakia-banias area where large scale massacres are bound to happen. The regime can not survive in Aleppo-Damascus which are heavily suni cities for long.