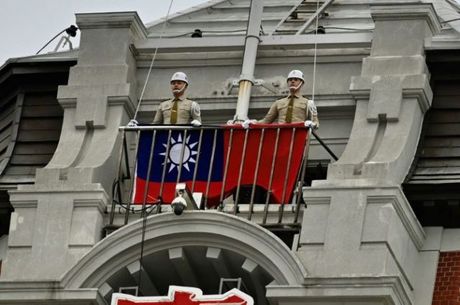 Taiwan on Monday accused two Chinese diplomats of gatecrashing a hotel function hosted by its de facto embassy in Fiji and assaulting an employee.

Taipei's foreign ministry said its trade office -- the equivalent of an embassy -- was hosting a party in the Fijian capital Suva on October 8 to celebrate Taiwan's National Day.

When the pair were asked to leave, they assaulted an official, putting him in hospital.

"We strongly condemn the actions by the Chinese embassy in Fiji staff for seriously violating the rule of law and civilised code of conduct," foreign ministry spokeswoman Joanne Ou said on Monday.

Taiwan's representative office has submitted evidence to Fiji's foreign ministry and local police as well as lodged a protest with the Chinese embassy, Ou added.

A Fiji police spokeswoman said an investigation into the Taiwanese function at the Grand Pacific Hotel was ongoing and its officers were working with Fiji's foreign affairs ministry.

She declined to provide further details and Fiji's foreign ministry did not respond to a request for comment.

In its statement Taipei said the Chinese diplomats were taken away by the police and "falsely claimed" that they had been attacked.

Taiwan said the alleged assault was the first ever physical confrontation between members of Beijing and Taipei's diplomatic missions.

Wang Ting-yu, a lawmaker from Taiwan's ruling party who sits on the parliamentary foreign affairs committee, said he was "appalled and outraged" by the assault.

"We can't let China bully its way into doing whatever it wants," he tweeted.

Relations between China and Taiwan are at their lowest in decades.

China's leaders view democratic Taiwan as their own territory and have vowed to one day seize the island of 23 million, by force if necessary.

Since the 2016 election of Taiwan's President Tsai Ing-wen, it has ramped up diplomatic and military pressure.

Tsai hails from a party that sees Taiwan as a de facto sovereign nation and not part of "one China".

Over the last four years Beijing has successfully poached seven of Taiwan's diplomatic allies, leaving only 15 countries in the world that officially recognise the island.

Most are small countries in Latin America and the Pacific.

Fiji has long been a staunch China ally and was the first Pacific island nation to forge diplomatic relations with Beijing in 1975.

China has also kept Taiwan locked out of major international bodies such as the World Health Organization, while pressuring companies and airlines to list the island as part of the mainland.