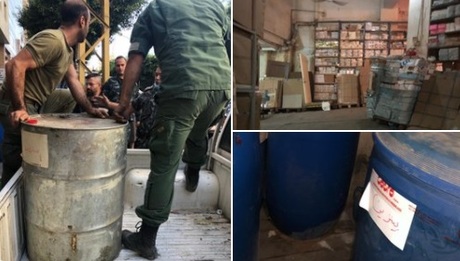 A large quantity of fuel posing risk to public safety was seized Monday in the Beirut neighborhood of Tariq al-Jedideh, ten days after a gasoline tank explosion in the same area killed three people, injured over 50 and caused massive damage.

In a statement, Beirut Municipality said the quantity was seized after Beirut Governor Marwan Abboud called on all citizens residing or working in Beirut to report any flammable material stored in underground or lower floors of residential buildings.

Abboud had also tasked the Beirut Fire Brigade, Beirut’s municipal guards and a specialized department at Beirut Municipality with inspecting such warehouses and reporting any threat to public safety.

In Monday’s raid, 1,185 liters of gasoline and three barrels of kerosene were seized in an underground book depot in a Tariq al-Jedideh building opposite to the Makassed General Hospital.

“The aforementioned depot does not enjoy the least requirements of public safety and during inspection it turned out that its portable fire extinguishers were expired,” the statement said.

“At the request of Governor Abboud, Fire Brigade and Beirut Guard crews confiscated the barrels and moved them to a safe location, averting a possible disaster among residential buildings and neighborhoods,” the statement added.

it is to be ashamed, we do our utmost, in the field of fashion, cars etc ... to appear modern and trendy, however we have little or no understanding of the basic laws and rules of a civilized nation.

SOS, True what you said, however you justify the symptoms( behaviour of the citizens) My comment is for the root cause " failed state"