France Teacher's Killer Had 'Contact' with Jihadist in Syria 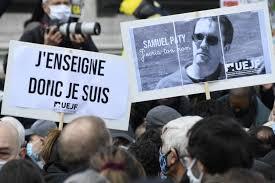 The man who decapitated a teacher in France for showing cartoons of the Prophet Mohammed in class had been in contact with a Russian-speaking jihadist in Syria, a source close to the case said on Thursday.

Seven people have been charged with complicity after 18-year-old Chechen Abdullakh Anzorov killed Samuel Paty on Friday, including two teenagers who helped him identify the teacher.

The identity of the jihadist in Syria has not yet been established, the source told AFP.

Le Parisien newspaper reported on Thursday that Anzorov's presumed contact had been located through an IP address traced back to Idlib, a city in northwestern Syria.