Mikhail Margelov Says Moscow Can Do No More for Assad 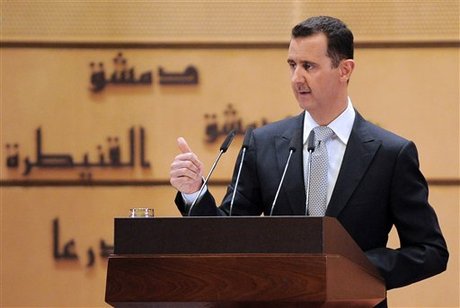 A member of Russia's Parliament, Mikhail Margelov, said Monday that Moscow ran out of methods to stop the international push for Syrian President Bashar Assad to step down.

Russia's veto of a U.N. Security Council resolution on Syria "was the last instrument allowing Bashar Assad to maintain the status quo in the international arena,” Margelov was quoted as saying by Russia's Itar-Tass news agency.

He also said Moscow's stance was a "serious signal to the president of Syria from Russia. This veto has exhausted our arsenal of such resources."

The Security Council has been blocked for months over Syria, with Russia and China maintaining that any moves in the U.N. body against Assad would be the first steps toward regime change by force, as in Libya last year.

But Margelov’s comments were seen as a shift in Russia's position since the Assad regime launched a deadly crackdown on protestors in March.

Assad "should read this position unequivocally: reforms, an end to violence, free elections. This is what the Syrian leadership should do immediately, today," he said.

Russia is too late to understand...but its hard to leave its friendship/relation with Syria...but it doesn't mean Russia should always be on their side...it support Syria and gave enough time for Asad to rectify himself

This story isn't just on Naharnet, google it.