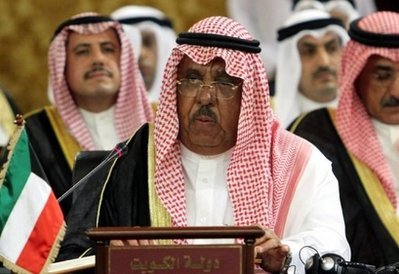 A Kuwaiti youth group called Sunday for a mass rally outside parliament on Tuesday to protest the government's "undemocratic practices" and to press for its ouster.

The group, Fifth Fence, said it is using Twitter to urge people to gather in large numbers for the protest.

Interior Minister Sheikh Jaber Khaled al-Sabah had been due to appear in parliament on Tuesday to be questioned about the death of a Kuwaiti citizen under torture at a police station.

But the inquiry was delayed after the government and its supporters in parliament decided to postpone sessions for six weeks, a move that angered the opposition which described it as unconstitutional.

"We at the Fifth Fence call on the Kuwaiti people to assemble at parliament... on Tuesday at 11.00 am (0800 GMT) to press for our legitimate right of holding sessions and to declare our rejection of the continuity of this government and its undemocratic practices," the group said in a statement.

It stressed the proposed protest is not linked to any external events, a clear reference to the massive anti-regime demonstrations still raging in Egypt.

The group also invited opposition MPs to attend the gathering.

Mohammad Ghazzai al-Mutairi, 35, died on January 11 at a police station after he was severely tortured for six days, according to a parliamentary probe. Sixteen policemen have been arrested in connection to this case.

Sheikh Jaber, a member of the ruling family, resigned over the incident but the cabinet asked him to stay on.