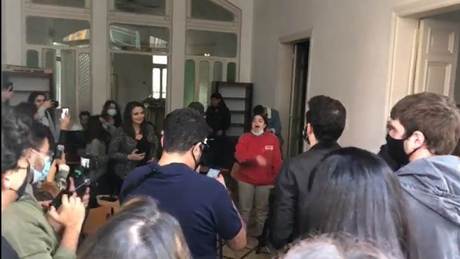 The Secular Club on Thursday announced that it achieved an “unprecedented victory” in the student elections at the Saint Joseph University (USJ).

“It managed to win the chairmanship of all student councils in the 12 faculties it ran in,” the Club said in a statement, adding that 85 out of 101 of its candidates have won in these faculties.

“Accordingly, the Club is the first winner in the USJ elections, whether in terms of the number of faculties it won or the number of seats,” it added.

It also pointed out that its victory at the law and political sciences faculty carried a special connotation this year due to “the harsh and systematic campaigns that the sectarian parties organized there against the Club, in addition to the atmosphere of sectarian polarization and violence between the sectarian parties during the electoral process.”

“This victory once again reflects the magnitude of the transformations that have impacted the public opinion of students in Lebanon’s universities since the establishment of secular clubs, which strongly accelerated after the start of the October 17 revolution,” it added.

In a statement, the Lebanese Forces student department meanwhile announced that the LF managed to “maintain the size of representation” although it ran alone in the elections, winning 24 seats.

Kataeb Party chief Sami Gemayel meanwhile congratulated USJ’s students over the “remarkable democratic experience which rose above the attempts of distortion and intimidation,” in reference to the clashes that marred the elections.

Maybe so and also a HUGE win for Christians in the Secular Club and independent categories. After all as you stated, "the majority of USJ are Christians"!

religion and politics is the worst thing a country can have, just look at the history of Europe 16th to 20th century, it speaks for itself.
good development at USJ, now the rest of the country, I try to be an optimist I believe another 30 to 50 years are needed that the rest of the population are finally going to really believe that planet earth is round and not flat