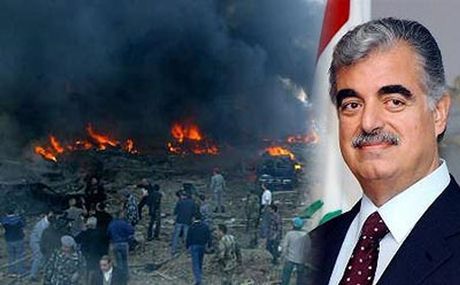 A U.N.-backed tribunal sentenced a member of the Hizbullah group to life imprisonment Friday for his involvement in the 2005 assassination of former Lebanese Prime Minister Rafik Hariri.

The defendant, Salim Ayyash, has never been arrested and was not in court at the Special Tribunal for Lebanon for Friday's sentencing hearing.

The tribunal convicted Ayyash in August of being a co-perpetrator in five charges linked to the suicide truck bombing on Beirut's seafront on Feb. 14, 2005. The huge blast killed Hariri and 21 others and injured 226.

"Mr. Ayyash participated in an act of terrorism that caused mass murder. His role ... was vital to the success of the attack," Presiding Judge David Re said.

"The trial chamber is satisfied that it should impose the maximum sentence for each of the five crimes of life imprisonment, to be served concurrently," Re added.

Three other Hizbullah members were acquitted in August of all charges that they also were involved in the killing that sent shock waves through the Middle East.

Only two judges and a small team of court officials were present in the courtroom Friday amid coronavirus restrictions, with other judges and lawyers attending the hearing remotely.

In a verdict met with disappointment in Beirut in August, the tribunal ruled that there was no evidence that the Hizbullah leadership and Syria were involved in the attack, despite saying the assassination happened as Hariri and his political allies were discussing calling for an "immediate and total withdrawal of Syrian forces from Lebanon."

On Friday, one of the trial judges, Janet Nosworthy, said the assassination "most probably had to have involved a state actor" and that the state "with most to gain from Mr. Hariri's elimination most likely was Syria."

Re also strongly suggested that Hizbullah has been shielding Ayyash from justice, pointing to speeches by its leader warning against any attempts to arrest any of the suspects when they were indicted by the tribunal.

"In my view, a strong inference is available from the above as to who has been shielding him from justice for all of these years," Re said, in a reference to the Hizbullah statements.

The trial chamber recommended that Lebanon establish a nationwide compensation scheme for victims of crimes and that the Special Tribunal should set up a trust fund for victims made up of voluntary contributions.

Re also said he made a declaration in the written sentencing judgment, which was not immediately available, on "some issues of judicial integrity" at the tribunal, including what he called attempts by judges to interfere with witness testimony during the trial and "financial impropriety."

"I'm calling on the Secretary General of the United Nations to intervene to restore judicial probity and integrity at the Special Tribunal for Lebanon," Re said.

Only one guy carried out this entire assisination? Why not sentence the head of snake?

Actually, it was a snake with two heads: Assad and Nasrallah.

Care and Legacy won't build a future, when the apple falls that far from the tree and rots away. You have more chances to build a new legacy rather than hang on to whims and hopes that a legacy will prevail. Move on brother and let go of this cesspool