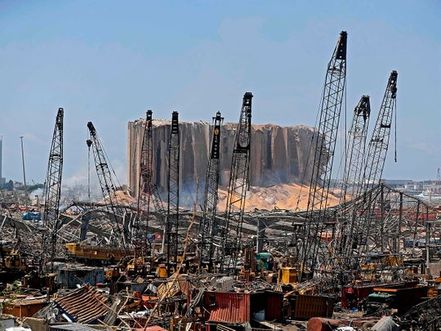 The investigation into the Beirut port blast is not limited to interrogations with political officials but also security and military leaders have also been summoned, the Kuwaiti al-Anbaa daily reported on Tuesday.

Sawwan has also summoned former chief of staff in the Lebanese army, Major General Walid Salman, for questioning tomorrow, according to the daily.

Quoting a ministerial source who spoke on condition of anonymity, the daily said that Sawwan has a recorded confession by Naddaf that he received an order from his head, Saliba, to open a hole in the back side of Ward No. 12 in Beirut port, where the ammonium nitrate was located, to see what was inside, and that he assigned one of his elements at the port to do the job where an electric welding was used.

“It only aims to discredit the reputation and the State Security apparatus,” they said in a statement.

The State Security agency also issued a statement describing the reports as "totally baseless and aimed at misleading the investigation."

God bless Aouni controlled State Security and its FPM appointed Chief Tony Saliba for making sure safety standards were followed regarding the explosive material at the port that were planted by the Saudi-American-Israeli-Sudani-Bahraini-Emirati coalition in order to discredit our Shia resistance and our brotherly Syrian regime.

The decision to open a hole in the back side of Ward No. 12 in Beirut port was the courageous thing to do in order to air these evil explosives and prevent them from exploding. His actions were further validated by his assigning a Syrian welder to close the whole.

General Tony Saliba showed a high level of competence, bravery and expertise in handling such a delicate matter and should run for the presidency where he will be in good company.

so his family knows about what he did or did not do more than he does?

There's only one answer for this... the ending of our system made for the warlords and criminals. Lock up this govt and round up all the previous govt members too. Arrest Siniora, Hariri, Berri, Geagea, Aoun, Every Gemayel, Jumblatt... the whole lot of them. Next change this wretched constitution.