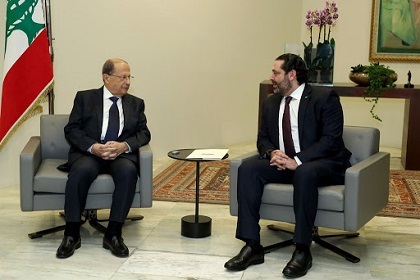 A “pivotal” meeting is expected on Tuesday between President Michel Aoun and PM-designate Saad Hariri on a cabinet formation, their thirteenth since the designation of the PM, media reports said.

MTV station said the meeting comes after strenuous efforts exerted by Bkirki and France in a bid to ease the obstacles hampering the formation since October, when Hariri was designated for the task.

It also noted efforts exerted in the same direction by General Security chief Maj. Gen. Abbas Ibrahim. Adding that the meeting came at the request of the President.

Al-Liwaa newspaper pointed to “determination” on part of Aoun and Hariri to make a breakthrough, and to form a government “as quickly as possible.”

Sources close to Baabda Palace, said as a result of the recent mediating role played by Maronite Patriarch Beshara el-Rahi, they “expect today’s meeting in Baabda to break the ice prevailing for some time now between the two men over the formation.”