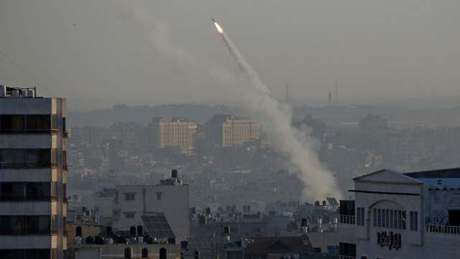 Israel has targeted a number of sites in Gaza after Palestinian militants fired rockets into the south of the country, the army said Saturday.

The Israeli Defence Force said that three Hamas targets -- including a rocket manufacturing site, underground infrastructure, and a military post -- had been struck.

"Hamas will bear the consequences for all terror emanating from Gaza," the IDF said in a tweet.

Sirens had sounded earlier in the southern port city of Ashkelon and the area surrounding the Gaza Strip, according to the army statement.

"Two rockets were fired from the Gaza Strip towards Israeli territory," a statement from the army said on Friday, adding that they were intercepted by the Iron Dome Aerial Defence System.

There were no reports of damage as a result of the interceptions.

The latest fire from the Hamas-ruled Palestinian enclave came over a month after one rocket was fired from the coastal strip into Israel.

Hamas, considered a terrorist group by Israel, seized control of Gaza from the rival Palestinian movement Fatah in 2007 in a near civil war.

Since then Hamas has fought three devastating wars with Israel in the coastal territory where about two million Palestinians live.

Israel has since maintained a crippling blockade on the Gaza Strip to prevent Hamas from arming.

"Israel Targets Hamas Sites after Gaza Militants Fire Rockets"
As the song goes "When will they ever learn"
Presumably, NEVER.