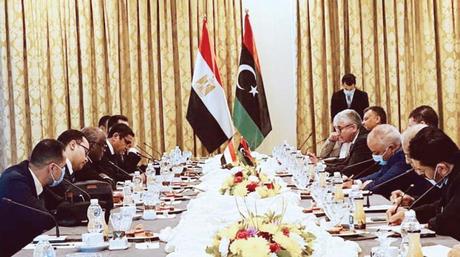 Egyptian security officials have met with representatives of Libya's Government of National Accord, a first delegation in nearly six years from Cairo, considered a backer of a rival camp in the conflict-hit country.

Interior minister for the U.N.-recognized GNA, Fathi Bachagha, held "a high-level meeting" with the Egyptian delegation, which included the deputy intelligence services chief, his office said.

The talks covered "ways of strengthening security cooperation" and support for a ceasefire signed in October between rival Libyan sides under U.N. auspices, the ministry added.

Libya has been riven by violence since a 2011 NATO-backed uprising that toppled and killed dictator Moammar Gadhafi.

Two rival administrations have vied for control of the oil-rich country for years, with the Tripoli-based GNA -- supported by Turkey -- pitted against forces loyal to eastern-based strongman Khalifa Haftar, backed by Egypt, Russia and the United Arab Emirates.

Turkish support for the GNA earlier this year helped repel a 14-month offensive against the capital by Haftar launched in April last year.

The ceasefire the two sides struck in October has set the stage for elections at the end of 2021.

Sunday's visit was the first made by an official Egyptian delegation to Tripoli since 2014, when Egypt closed its embassy in the Libyan capital due to violence.

The aim of the talks was to work to "normalise diplomatic relations" between Tripoli and Cairo and to discuss "cooperation in various areas", said Mohammad Elgeblawi, spokesman for the GNA foreign ministry.

According to Elgeblawi, the delegation pledged to reopen the Egyptian consulate "as soon as possible" and to re-establish air links between the two capitals, which have been interrupted for several years.

The visit comes days after Haftar said in a speech that his forces would "prepare to drive out the occupier by faith, will and weapons," referring to Turkish troops operating in support of the GNA.

Turkish Defence Minister Hulusi Akar was in Tripoli on Saturday and vowed that any attack by Haftar on Turkey's personnel in Libya would be met with force.