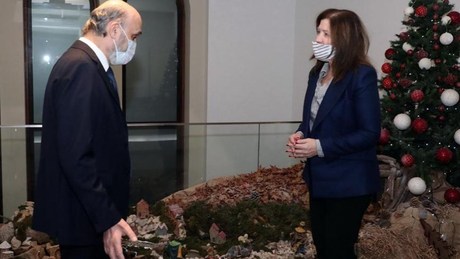 Head of the Lebanese Forces chief Samir Geagea on Tuesday met with U.S. ambassador to Lebanon, Dorothy Shea at his residence in Maarab and discussed the political developments in Lebanon and the region.

Geagea stressed during the meeting that staging early parliamentary elections would help solve the crisis in Lebanon.

“There is no hope in the current ruling authority, the only solution for Lebanon’s crisis begins with staging early parliamentary elections,” said Geagea.

The LF chief-Shea meeting took place in the presence of head of the economic and political department at the embassy, ​​Janet Cole, and Geagea’s advisor for foreign relations, Elie Khoury.

On the ongoing investigations into Beirut’s port blast, Geagea said “as a result of political interference, the local probe is facing a lot of difficulties,” urging for an international probe.

“There is no hope in the current ruling authority, the only solution for Lebanon’s crisis begins with staging early parliamentary elections,” said Geagea.

Democracy in Lebanon is laughable, parliamentary elections? people sell their voting rights, the people vote for the highest bidder, and if they don't want to be bribed, they are threatened. Ironically, the majority of the population are convinced that this is democracy

Those Sheates are destroying this country!
I suggest you skip the elections and have the Biden campaign mail you the results.