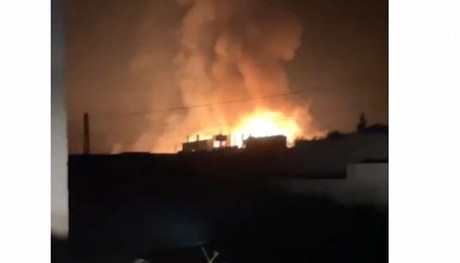 “Ten people were wounded in the fuel depot explosion in the town of al-Qasr, seven of whom were transferred to hospital and three were treated on the scene,” Lebanese Red Cross chief Georges Kettaneh told LBCI TV, adding that a missing person has been found.

Military sources meanwhile told the TV network that the depots are located near the Lebanese border but inside Syrian territory, noting that no Lebanese soldiers were injured in the incident.

Informed sources meanwhile told MTV that “the fire and blasts that the border town of al-Qasr has witnessed likely resulted from Israeli bombing, especially that they coincided with intensive low-altitude overflights by Israeli enemy warplanes over several Lebanese regions.”

“The fire site contains diesel and gas tanks owned by a Lebanese person from the Obeid family and he is close to Hizbullah and runs a fuel smuggling route from Lebanon to Syria,” the sources added.

“Years ago, Obeid turned from a truck driver into a wealthy man and he deals with several fuel companies in Lebanon. He purchases fuel from them, stores it and then smuggles it to Syrian territory through several means,” the sources went on to say.

“Years ago, Obeid turned from a truck driver into a wealthy man and he deals with several fuel companies in Lebanon. He purchases fuel from them, stores it and then smuggles it to Syrian territory through several means,”

Where is the Lebanese army in all of this or are they part of the deal too?

They are the corrupt core of the Lebanese system. Every failure in school who cannot and is not accepted in a respectable university, goes into the army because he knows it is a source of influence and riches. Look at their lifestyles, their wives lifestyles, the cars they drive, and the vacations they take. They are useless overweighed good for nothing parasites.

The armed forces have succeeded in preventing smuggling operations, the transfer of weapons and fuel across our southern border with the zionist enemy and for this they need to be commended.

News doesn't get any better than this.