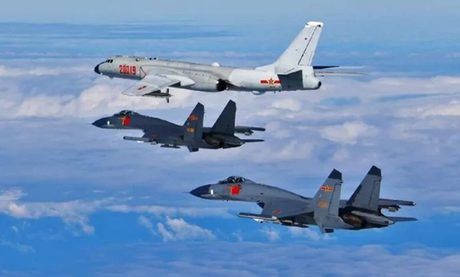 Chinese jets made a record 380 incursions into Taiwan's defence zone last year, a defence official said Tuesday, as a military-linked think-tank warned tensions were now at their highest since the mid-1990s.

Democratic and self-ruled Taiwan lives under the constant threat of invasion by authoritarian China, which views the island as its own territory and has vowed to seize it one day, by force if necessary.

Beijing's animosity has increased dramatically since Taiwanese President Tsai Ing-wen won election in 2016, as she rejects the idea that the island is part of "one China".

"The 380 incursions into our southwest ADIZ in 2020 are a lot more frequent than the past," said defence ministry spokesman Shih Shun-wen.

"This... poses a threat to regional and our national security."

Chinese aircraft targeted the area "to test our military's response, to exert pressure on our aerial defence and to squeeze the aerial space for our activities", he added.

The figures came as the military-affiliated Institute for National Defence and Security Research warned in an annual report on the People's Liberation Army that "the Chinese military threat was the highest since the 1996 missile crisis in Taiwan Strait".

That year Beijing fired missiles into the strait in a bid to deter voters in the island's first democratic presidential election, prompting Washington to send warships to the area.

Jeremy Hung, a co-author of the report, said Chinese jets flew closer to Taiwan and frequently into its defence zone on at least 110 days last year.

This compared with just six long-distance training missions around Taiwan in 2016, and 20 in 2017.

Beijing's increased military actions were meant as "a warning to Taiwan not to cross the red line" amid warming relations with the United States, Hung said.

Chinese jets also crossed over the so-called "median line" of the Taiwan Strait during two high-level visits by US officials.

The median line is an unofficial but, until now, largely adhered to border running down the narrow strait separating Taiwan from the mainland.

Last year a Chinese foreign ministry spokesman declared the line did not exist.

Beijing has also been angered by the increasingly warm ties Taiwan built with Washington during outgoing President Donald Trump's tenure.

On top of the high-level visits, his administration approved some $18 billion worth of arms sales to Taipei, while US warships sailed through the Taiwan Strait 13 times last year, according to local media.