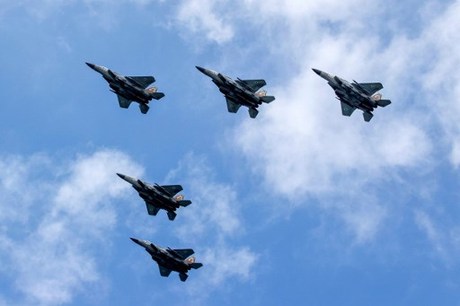 The Syrian Observatory for Human Rights, a UK-based organization with an extensive network on the ground, was not immediately able to provide the casualties' nationalities.

Syrian state media had reported an "Israeli aggression" overnight against targets in the south of the country, adding that its anti-air defense system had intercepted most missiles.

Israel routinely carries out raids in Syria, mostly against targets affiliated with Iran in what it says is a bid to prevent its archfoe from securing further foothold along its borders.

Iran has members of its own military as well as fighters from a variety of nationalities fighting with militias it supports deployed across Syria.

Last month, Israel said it had hit about 50 targets in the neighboring country in 2020.

The Israeli army has carried out hundreds of air and missile strikes on Syria since the civil war broke out in 2011, targeting Iranian and Lebanese Hizbullah forces as well as government troops.

Israel rarely acknowledges individual strikes, but has done so when responding to what it describes as aggression inside Israeli territory.

Making the World a Better Place
Three Dead Shia Terrorists At a Time!

More Bronze statues are being made as we speak.

Israel can pretty much strike anywhere they want if they find it necessary and they only way they won`t conduct any strikes anywhere is when Hezbollah lay down its arms, for the benefit of all Lebanese.

your name really describes you, BJ!!!

lol @ the native shia independent leftist from sea above:)

bigjohn. Unlike you I can declare that I come from England, write from England and don't use any other names.
By the way you talk about ethnic cleansing, so let us look at the true situation of the Arabs in Israel.
Members of Parliament 16 out of 120
Supreme Court Justice 1 out of 9
Hundreds of Army and Police officers and many lower level soldiers and police
Thousands of doctors (including the Head of one of the hospitals) nurses and medical auxiliaries.
Thousands of judges and lawyers, teachers.
Yet you call that "Terrorist ethnic cleansing apartheid regime". You really are a joke.

Maybe my numbers are a bit out, but certainly they disprove bigjohn's claim of "terrorist ethnic cleansing apartheid regime"
By the way from what I remember and read even now Lebanon is the perfect example of apartheid (separation), whereby every important position is reserved for a member of a specific religious group.