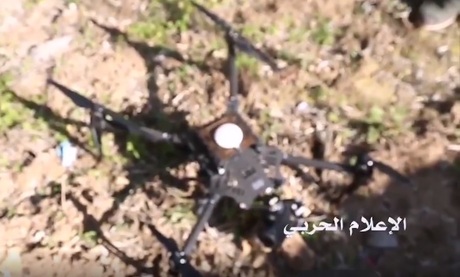 Hizbullah said on Monday it downed an Israeli drone that breached Lebanese airspace after it flew over the U.N.-demarcated Blue Line border, while Israel acknowledged an unmanned aircraft had crashed.

The Military Media of the Islamic Resistance issued a statement on Monday saying it “downed an Israeli drone that breached the Lebanese airspace over the outskirts of the town of Blida in south Lebanon.”

The statement added: “The drone is now in the hands of our fighters.”

Israeli army spokesman Avichay Adraee said in a tweet: “A short while ago, an Israeli army drone fell inside Lebanese territory during operational activity on the border with Lebanon.

"There is no risk of breach of information," he said.

Hizbullah released images of a four-armed drone equipped with what appeared to be a camera.

The announcement came just 10 days after the Israeli army shot down an unmanned aircraft it said had entered its airspace from Lebanon.

In August 2020, Hizbullah also said it downed and seized an Israeli drone that flew into Lebanese airspace. Israel at the time likewise said the drone had "fallen."

Hizbullah had in September 2019 vowed to down Israeli drones overflying Lebanon following an incident a month earlier when two drones packed with explosives targeted Hizbullah's stronghold in Beirut's southern suburbs.

God bless our Shia resistance for complying with U.N Resolution 1701 which calls for downing Israeli drones South of the Litany River. Our Shia resistance has been entrusted with defending our borders while the semi-official Lebanese Army is seconded to handling rioters in ISIS controlled Tripoli.