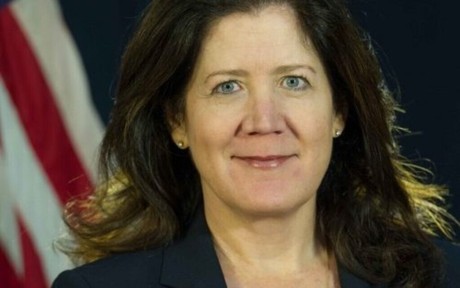 U.S. Ambassador to Lebanon Dorothy Shea described the assassination of activist Lokman Slim during his funeral on Thursday as a “barbaric act.”

“The killing of activist Lokman Slim is an unacceptable barbaric act,” said Shea during the funeral ceremony of the intellectual activist held in the southern suburbs of Beirut.

"Today, I am honored to be with you -- his family and his loved ones -- to convey in person my deepest sympathy. You were robbed. We all were robbed of a great man," she added.

"Let us also celebrate some of the characteristics that made Lokman who he was: he was tireless and relentless in his pursuit to reconcile Lebanon’s people and to promote freedom and inclusion. These efforts cannot and will not be suppressed through fear or violence, because they are what is right," Shea went on to say.

"So, like him, let us not be deterred," she urged.

"We will push for what is just. We will join you in demanding accountability for this horrific crime," the ambassador promised.

She also said that the U.S. embassy will continue its "partnership with the organizations he helped found."

"We are proud of these partnerships," she emphasized, pledging to seek to advance Slim's "vision."

The German ambassador to Lebanon, Andreas Kindl, also paid tribute to Lokman during the funeral, he said: “Lokman’s death was a personal loss for me. My condolences to his family. We demand transparent investigation.”

The funeral of Slim was held Thursday in Ghobeiry, in the presence of ambassadors and political, media and religious figures from various sects, as well as family members and friends.

Slim, a prominent Lebanese activist and intellectual known for his opposition to Hizbullah was found shot dead in his car in the country's south last Thursday.

It drew immediate condemnation from abroad and tributes from his many friends.

Slim, 58, had long been a leading secular voice in the Shiite community and was routinely criticised, and often threatened, over his anti-Hizbullah stance.

Lebanese social media erupted over the murder, as people commented on the latest in a long line of Lebanon's political killings.

Slim, long a hate figure for Hizbullah loyalists who accused him of being a Western puppet, lived without personal protection.

Geagea murdered Frangieh and his entire family, even a child in Ehden, nobody talks about that anymore.

What about Tony Frangieh? A critic of the Phalangists

The phalangist resistance movement is the true Lebanese resistance. It resisted against the displacement plan of christian Lebanese of georges Shultz, against all odds, against palestinians, syrians, americans, saudis, egyptians, israelis and it won.

Without it, christian would be out of lebanon like iraki and syrian christians and without its christians, Lebanon's moslem would sink into stone age. Think Yemen or Somalia...

The hezbollah militia is nothing but a pawn for iranian medieval backward regime.

Nonsense, Tony Frangieh and his family were all Maronitr Christians and murdered by other Maronites such as Geagea.

Who cares about what happened in times of war 40 years ago ya ahbal!

Spot on. We weren’t even born back then.