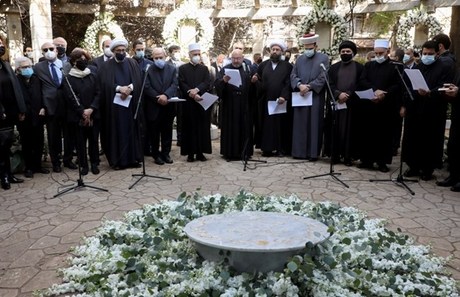 A multi-faith memorial service for Lebanese activist Lokman Slim, who was killed last week, triggered a row Thursday after a Shiite cleric was attacked on social media for taking part.

Slim, an academic and leading secular voice from the Shiite community, was routinely criticized and often threatened over his stance against the powerful Shiite movement Hizbullah.

The service, broadcast live by several channels, included a reading from the Koran and hymn-singing. It was attended by friends, family and diplomats, including U.S. Ambassador to Lebanon Dorothy Shea.

Many praised the service as an expression of co-existence between Lebanon's many sects but it also invited criticism.

Ali al-Khalil, the Shiite cleric who read the Koran, came under attack on social media from Hizbullah loyalists and later apologized for attending the event.

"I apologize to all brothers and sisters who watched me on television channels I should not have appeared on," Khalil said in a video widely circulated online.

"I should not have... put myself in a position that invites suspicion.

"My (political) orientation is known," he said, referring to his support for the Iran-backed Hizbullah.

Activists on social media saw the apology as further evidence of the kind of pressure the movement exerts on dissenters or anyone perceived as cozying up to its opponents or enemies.

"They made him apologize because he prayed for Lokman Slim," the BlogBaladi activist page said on Facebook, referring to the Shiite group.

Christian supporters of the Hizbullah-allied Free Patriotic Movement also objected to the service, but for different reasons.

"This is clear heresy and an insult to sanctity," said one social media user who identified as an FPM supporter and took issue with the choice of music.

"Christian rituals dictate that Good Friday hymns are to be chanted exclusively at funerals for Christians," he said.

Several other FPM activists on Twitter echoed his grievance.

Lokman was widely hated by Hizbullah loyalists who accused him of being a Western puppet.

He was found shot dead in his car on February 4 in south Lebanon, where Hizbullah has wide influence.

The Shiite group has denounced the murder and called for an investigation, a call repeated Thursday in the weekly statement of its parliamentary bloc.

Wow!!! what a bunch of sectarian clowns... praying for some one does not matter by whom and what prayer is used. I have a Shia friend who reads the "Fetha" for my father every chance he gets and I drive him to the cemetery, by the way we are Christian for those that that matters!!! Lebanon is finished

"Party above G_d" is no way to go through life; at the close, there can be no judgment other than "yours was a do-over"and, thus, wasted opportunity for good

"Christian rituals dictate that Good Friday hymns are to be chanted exclusively at funerals for Christians," he said...I am speechless...after all what happened to the Lebanese, they still talk like that! I guess shit has not hit rock bottom yet...what a hopeless country

So you want lebanese to change their religious belief?

Yes, for crying out loud!! Tolerance and religious freedom, that's what the Lebanese need to believe in! Not reverting to sectarian divisions again! So what if someone sings a christian hymn at a muslim's funeral?? It's a show of respect and co-existence, something to be proud of and not denigrated!!!

Christian faith and believe is based on Love and peace. Wasn't not Jesus that said Love thy enemy? Love one another as I have loved you. Your question should be do you expect the Lebanese to practice what they belief?

Cause and effect:
The most important basic rule that a country becomes a nation for all its citizens, is no discrimination and equal rights to all. By no compliance to this basic rule, the effects are a.o. : internal divisions, animosity, fertile ground for foreign interferences, dictatorship, lack of uniform approach to ( education, social, economic,health, etc...) national strategies and programs.
Religion in politic combined with the feudal system is embedded in the mindset of the average Lebanese. I strongly believe that this is the main cause of the misery in Lebanon.

I’m also shocked by the fact that the Maronite religious hierarchy contested the recitation of prayers for Lokman Slim. His wife is Christian. I hope Rahi will correct this on the record or else he truly is a sick sectarian pos.