9 Dead in Israeli Strike on Syria, Damascus Complains to U.N. 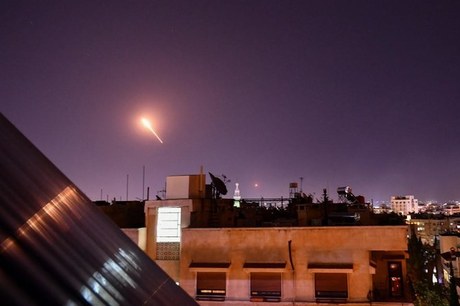 The SANA news agency claimed that Syrian air defenses shot down most of the missiles, which it said were fired from Syria's Israeli-occupied Golan Heights.

The Britain-based Syrian Observatory for Human Rights, an opposition war monitor with a network of activists on the ground, said the strikes hit positions of the Syrian army's Fourth Division in the mountains near the highway that links Damascus with the Lebanese capital of Beirut. It said another strike hit Syrian army positions in Kisweh, just south of Damascus.

The Observatory said that of the nine Iran-backed fighters killed, seven were near the Damascus-Beirut highway and two in Kisweh. Weapons depots were also struck in both areas, it added.

Syria's foreign ministry filed a complaint with the U.N. Security Council and called on the international community to condemn Israel and prevent it from carrying out such attacks in the future.

Monday's strike was the first since Feb. 3, when a Syrian military official said Israel fired surface-to-surface missiles at targets in southern Syria, causing only material damage.

Good news - for once the IDF is doing something useful

I love this standard phrase from SANA News Agency: "Syrian air defenses shot down most of the missiles" LOL