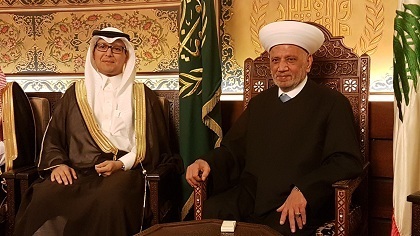 Saudi Ambassador to Lebanon Walid al-Bukhari reiterated the Kingdom's support for the “Lebanese people and their institutions,” during a meeting he held with Grand Sunni Mufti of the Republic Sheikh Abdul Latif Daryan in Dar el-Fatwa.

Bukhari voiced hopes that Lebanon “rapidly overcomes the crisis it is enduring,” stressing that “SA won’t abandon the Lebanese people and will remain supportive of it and of its institutions,” a statement released by the press office in Dar el-Fatwa said.

Daryan and Bukhari discussed the general situation in the region, it said.

For his part, Daryan thanked Saudi Arabia for the assistance it provided to the Lebanese people, stressing significance on “firm relations” between the two countries.