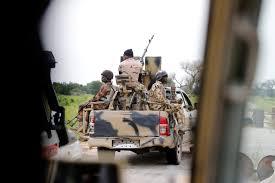 A jihadist attack in northeast Nigeria has forced many people to flee after Islamic state-affiliated insurgents overran a key army base, military sources and residents told AFP Sunday.

The Islamic State West Africa Province (ISWAP) group that split from the Boko Haram movement in 2016 has become a dominant threat in the region, attacking soldiers and bases while killing and kidnapping passengers at bogus checkpoints.

Late on Friday ISWAP fighters on board several trucks fitted with machine guns raided Dikwa, in Borno state, where the Nigerian army has one of its key "super camp" military bases.

"The terrorists attacked the super camp... and dislodged troops," a military officer who asked to remain anonymous told AFP.

"They attacked the base from the northern and northeastern flanks, overwhelming the soldiers and forcing them to withdraw," said a second military source who also spoke on condition of anonymity.

As residents started fleeing, the Nigerian airforce sent fighter jets, pushing the insurgents back out of the town, the sources said.

This was not the first raid by insurgents on super camps.

As recently as Monday ISWAP killed eight soldiers when its fighters dislodged troops from another base in Marte, also in Borno state, according to military sources.

The army base in Marte had already been temporarily overrun in January.

On Sunday the Nigerian army replaced its military commanders in Dikwa and Marte for "incompetence and leadership gap" following the attacks, military sources said.

There were still no official details of military or civilian casualties.

But in a statement that could not be independently verified, ISWAP claimed the Dikwa attack, saying its fighters killed 15 soldiers and injured several others.

The group also claimed it destroyed eight military vehicles and seized four others along with ammunition.

The total number of people displaced following the attack is not yet known but more than 130,000 people live in Dikwa including 75,000 who had already fled from other parts of the region and were living in camps.

"We ran out into the bush and to Ajiri (town) while fighting was going on," resident Adamu Ahmad said.

Another resident, Babuji Usman, also confirmed that many people had fled to Ajiri (15 kilometers away) after Friday's attack.

Nigeria has been fighting insurgents in the region for more than a decade.

In August 2014 Boko Haram had seized Dikwa but it was retaken seven months later with the help of Chadian forces, allowing residents to return.

The conflict has killed 36,000 people and displaced around two million from their homes in the northeast, according to the U.N.

President Muhammadu Buhari appointed new military commanders earlier this month, after mounting pressure even from some allies, in what experts said was a bid to breathe new life into the top military ranks.