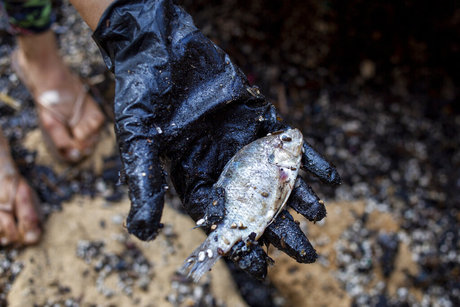 Israeli authorities on Sunday warned people to keep away from the Mediterranean shore to avoid massive tar pollution, as thousands of laborers and volunteers worked to clean contaminated beaches.

A joint statement from the ministries of interior, environmental protection and health, called on the public to stay away from "the beaches for bathing, sport and leisure, until further notice."

"Exposure to tar can risk the public's health," the statement said.

The tar, which killed many marine creatures, was apparently a result of "dozens to hundreds of tons" of oil being unloaded from a ship, according to estimates by the environmental protection ministry.

A massive cleanup operation has been launched involving thousands of volunteers and soldiers on loan from the army.

On a tour of a beach at the southern city of Ashdod, Prime Minister Benjamin Netanyahu said the government would on Monday allocate funds to support the cleanup.

Visiting the beach alongside Netanyahu, Environmental Protection Minister Gila Gamliel said they needed "tens of millions of shekels" to clean the beaches, noting the intent to sue the polluting ship -- once it's located.

"We need to look to the future -- this event and similar ones around the world show us how crucial it is to wean ourselves from these polluting fuels, and shift to renewable energy," Gamliel said in remarks relayed by Netanyahu's office.

All but two of Israel's approximately 100 public Mediterranean beaches were closed for the winter, with the bathing season due to open on March 20.

"Our goal is to open the beaches on time," Gamliel said.

Not only tar was washed up on Israel's eastern Mediterranean shore as a result of the storm.

At the Nitzanim beach near the southern city of Ashkelon, the carcass of an almost 17-meter male fin whale was discovered on Thursday.

The Nature and Parks Authority had determined that the decayed state of the whale indicated its death had been some two weeks ago, meaning it could not be related to the tar pollution.

On Sunday, Nature and Parks Authority workers used a tractor and a digger to dig a huge grave in the sandy beach, into which the whale -- of the second-biggest mammal species in the world after the Blue Whale -- was pushed.