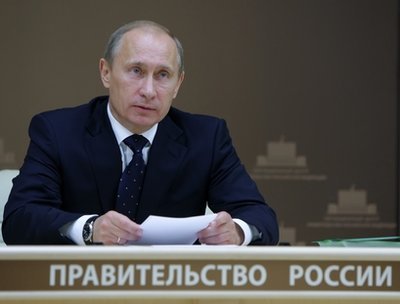 Israel's deadly raid on an aid flotilla for Gaza was a tragedy that demands detailed investigation and must not be repeated, Russian Prime Minister Vladimir Putin told Agence France Presse in an interview.

"What is especially tragic is that this act was carried out in neutral waters," the Russian prime minister said in a discussion late Monday in the Black Sea resort town of Sochi.

"This is something entirely new and of course requires careful review. Everything needs to be done to make sure that nothing of the kind happens again," Putin warned.

Asked if Russia wanted Israel to lift its blockade on Gaza, he stated: "We have always called for the lifting of the blockade.

"I don't think such methods are effective in resolving the problems faced in the region."

Putin compared Israel's struggle with "extremism" to Russia's own battle with militants and instability in the North Caucasus region and suggested experience showed that Israel should change tactics.

"Using such means will not solve the problems the region faces. I am not saying now which means will solve them, but only which ones are wrong.

"I want to stress that we have always proceeded from the position that all the people living in this region have a right to secure self-development, including Israel.

"But ... how these goals should be achieved -- this is of course a question that requires separate review, separate discussion following the recent tragic events" over the flotilla, he said.

Israel imposed its blockade on Gaza after the Islamist group Hamas came to power there following elections in 2007.

The West and the Jewish state classify Hamas as a "terror movement" but Russia does not and Hamas leader Khaled Meshaal has been received by top Russian officials in Moscow on several occasions in recent years.

Putin's comments came a day before the United States voiced its support for international participation in Israel's probe of the deadly raid.

In Istanbul on Tuesday, Putin denounced the Israeli raid as a "crude violation" of international law and said Russia intended to raise the issue of who should carry out the probe of the convoy raid at the United Nations.

The Israeli raid, which left nine dead, sparked furious responses from many in the international community, with Turkey reacting particularly harshly.

Russia's relationship with Israel improved steadily between 2000 and 2008 during Putin's two terms as Russian president. The Kremlin however has at the same time sought to rebuild long-standing and close relationships with Arab countries.

On the other hand, Putin said that Russia is working closely with other states to ease concern over Iran's nuclear program but views sanctions like those expected to be approved by the U.N. on Wednesday as ineffective.

"Sanctions are basically ineffective," Putin said two days ahead of the vote by the U.N. Security Council likely to slap a fourth round of sanctions on Tehran over lingering questions about its nuclear intentions.

Putin asserted that past experience had demonstrated that imposing sanctions was no substitute for resolving core problems with the behavior of individual states.

"International practice knows perfectly well how these sanctions work. And what? Do you know of a single case where they were effective?"

Moscow has called repeatedly on the Iranian leadership to cooperate fully with the U.N. nuclear watchdog, but has also resisted use of sanctions as a tool for encouraging Iran to cooperate more fully in resolving questions about its nuclear program.

President Dmitry Medvedev however signaled last year however that Russia, having been rebuffed itself in repeated efforts to ease worries about Iran's nuclear activities, was having a change of heart on sanctions.

The United States has steadfastly argued in favor of fresh sanctions on Iran however and Putin confirmed that Moscow was also interested in working closely with other states within the United Nations to resolve the problem.

"We are ready, together with the entire international community, to seek a resolution to Iranian nuclear problems and we will move down this path together," Putin said.

Speaking Tuesday in Istanbul, Putin however said the new sanctions "should not be excessive and should not put the Iranian people in a complicated position which would put up barriers on the path to peaceful nuclear energy."

He pointed to North Korea as another example of where international sanctions failed to compel Pyongyang to abandon its secret nuclear weapons program.

"At some point in the application of sanctions, the North Korean leadership announced that it had acquired nuclear weapons. And so what was the purpose of all these sanctions?"(AFP)