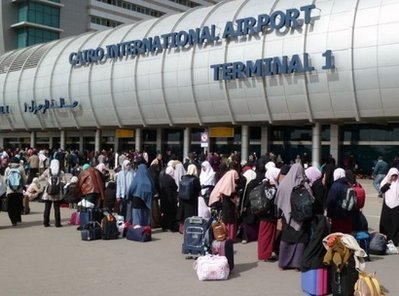 Authorities at Cairo airport began screening incoming and outgoing diplomatic pouches on Monday, the MENA agency said, a day after the foreign ministry accused diplomats of trying to bring weapons into Egypt.

"The pouches will be screened by X-ray ... to stop any illegal items from entering" Egypt, which has been rocked by two weeks of deadly nationwide anti-government protests.

The "exceptional measures" were introduced on the orders of the foreign ministry, despite international agreements exempting diplomatic bags from being searched.

On Sunday, the foreign ministry accused diplomats of smuggling weapons and communications equipment into the restive country.

"It has been noticed of late that some foreign embassies in Cairo have tried to bring some weapons and communications equipment in diplomatic bags, relying on the principle of immunity," the ministry said in a statement.

It added that the "concerned authorities reserve the right to confiscate any weapon or technological equipment that would require a permit in Egypt," the statement added.