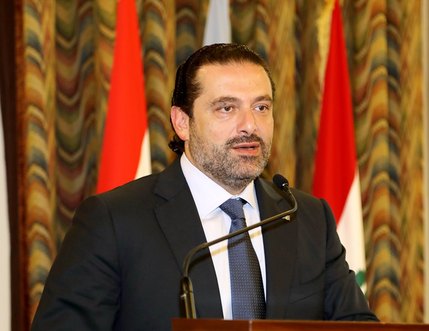 President Michel Aoun should call for an “early presidential vote” if he is “unable” to sign the decrees of a specialist, nonpartisan government, Prime Minister-designate Saad Hariri said on Wednesday, in a swift response to remarks voiced by the president.

“I was surprised, like all Lebanese, by His Excellency the President inviting me through a televised address to the presidential palace for the immediate formation of a government,” Hariri said in a written statement.

“Seeing as I have visited His Excellency the President 16 times since being designated premier… to agree on a government of nonpartisan specialists, I answer him that I will be honored to visit him for a 17th time… to discuss with him the line-up that has been present in his hands since several weeks, and to reach an immediate declaration of the cabinet line-up,” Hariri added.

“If His Excellency the President finds himself unable to sign the decrees of a government of nonpartisan specialists that can implement the needed reforms… he will have to be frank with the Lebanese about the real reason pushing him to try to impede the will of parliament, which had picked the PM-designate,” Hariri went on to say.

He added that Aoun can “shorten the suffering of the Lebanese by allowing for an early presidential vote.”

This is “the only constitutional method capable of annulling the effect of him being chosen by MPs for the presidency five years ago, exactly the same as they have chosen me as PM-designate five months ago,” Hariri said.

In a televised address earlier on Wednesday, Aoun called on Hariri to form the government or quit.

“Out of my oath, and after PM-designate Saad Hariri presented a draft cabinet line-up that does not meet the minimum requirements of national balance and respect for the National Pact, which plunged the country into the tunnel of paralysis, I invite him to the Baabda Palace, for the immediate formation of the government in agreement with me and according to the applicable constitutional mechanism and standards for the formation of governments, without excuses or delay,” Aoun said.

Touche! Is it possible that Saad Hariri statement willing to take the poison pill to save Lebanon is real? It may be. He understood that Lebanon only solution is to discredit entire political class, including his party, so Thawra has a chance for real transformation and reform. As duo Shia blocked parliament to prevent tribunal, and Aoun blocked presidency to get elected, Saad is blocking government giving Thawra a fighting chance to organize and unite. Any government today will float Hizb and Marionette Aoun and will be disaster to Lebanon. Saad may be willing to sacrifice his party so people understand the danger and consequences of Hizbollah and find no solution except Neutrality, no arms outside army, and a new political class. Cedar Revolution II may be around the corner, with or without the Shia as in CR I. Hopefully Shia can break free of criminal Hizb and corrupt Berri control and join the tent of free and independent Lebanon.

Haha good one from Hariri, in the bullseye! Having Aoun as president is far worse than a vacuum at Baabda.... but let’s not forget that Aoun is sitting there because of Hariri and his Faustian deal.

Aoun's history has been that of aggression, ignorance, sectarianism, negligence, incompetence, and destruction.

Hariri's history has been that of weakness, incompetence, lack of vision, entitlement, and corruption.

Resign both of you!

you all should get the hell out of the Lebanese politics and be tried for theft of public properties. You have brought nothing but disgrace to this tiny nation.

I don't trust Hariri at all... but he is certainly more genuine and sincere that Aoun.
I think that Hariri truly realized that we need a non partisan government of Technocrats.
The Zombie Aoun will only do what he is told to do by his son in outlaw and his Iranian masters... pityful for the christians... pitiful for the suffering Lebanese people...

I Think Hariri has good intention, the international politics (France, the US and many other Western-oriented countries) support the Prime Minister. In terms of strength and weakness, I would say his strength: he can be influential in arranging financial support for Lebanon; his weakness: his naivety is the reason for his optimism to believe that he could be the game changer in Lebanese politics. The reality no one can, the foundation of this country is wrong: all rulers have gangster mentality and all their followers lack integrity, therefore Lebanon has always been fertile breeding ground for foreign opportunists and abusers.