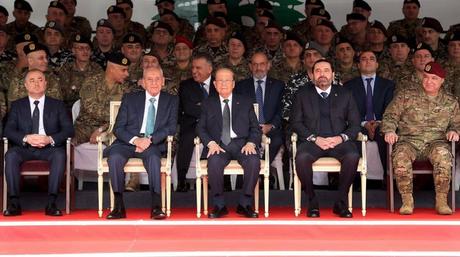 European and American authorities “must” raise pressure, and even impose “sanctions” on Lebanon’s political class in order to ease the hurdles delaying a much-needed government in the crisis-hit country, al-Joumhouria daily reported on Thursday.

The daily quoted a French diplomat, who spoke on condition of anonymity, as saying that “Europeans and the Americans should increase pressure on the Lebanese political class to form a new government, and this may also be done through sanctions,” he said.

“The pressure on political leaders should be greatly increased," the diplomat told reporters, adding that the efforts in that direction are going to be the focus of their work in the next two week. “We will not move alone, but with our European partners and with the Americans," he added.

The process of forming a government has been delayed by endless haggling between the main ruling parties.

Lebanon's deeply divided political class has failed to agree on a new cabinet since a massive explosion in Beirut port last August that killed more than 200 people and led to the government's resignation.

“Imposition of sanctions will be brought up on the table,” and will be imposed on Lebanese officials who obstruct any political progress, added the source. "The issue of sanctions was not the priority in August and September, but after six or seven months it became legitimate,” he emphasized.

that is indeed the only language they understand: "the stick" and hit them hard.

Please make sure to freeze all their & family accounts including bitcoins and off-shore hidden accounts. They can get it back in the future if found innocent but for now they are all presumed guilty until proven innocent.

Basil and Jreissati near the top of the list plz, just to get basil on another matter which he won't get out of.

Freeze their assets and travel opportunities for them and their families. It’ll be impossible for Berri as he is American and a CIA agent.