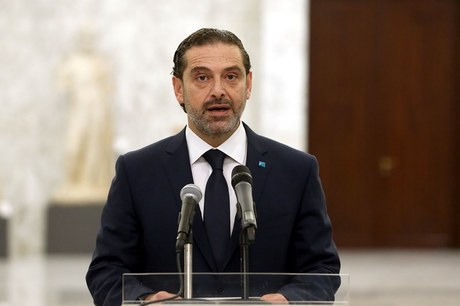 A much-anticipated meeting between President Michel Aoun and PM-designate Saad Hariri has failed to achieve any breakthrough in the stalled cabinet formation process.

“Unfortunately, His Excellency the President sent me yesterday a full line-up put together by him, which contained the allocation of portfolios to sects and parties, with a letter saying that it would be better if I filled it up,” Hariri said after meeting Aoun in Baabda.

“The paper contained a one-third-plus-one share for his political camp in formats of 18 ministers, 20 ministers and 22 ministers. His Excellency asked me to suggest candidates for the portfolios according to the sectarian and partisan distribution prepared b him,” the PM-designate added.

“With all due transparency, I will tell you what I told him today. First: It is unacceptable because the PM-designate’s job is not to fill papers submitted by anyone not it is the job of the President to form governments. And secondly because our constitution clearly says that the PM-designate would form a cabinet, select names and discuss the line-up with the President,” Hariri went on to say.

He added: “Accordingly, I told His Excellency with all due respect that I will consider his letter null and void and I returned it to him. I also told him that I will keep a copy of it for history!”

Hariri also added that he told Aoun that he had submitted a cabinet line-up 100 days ago and that he is still ready for “any suggestions and modifications regarding names and portfolios.”

“I even facilitated the solution for him regarding his insistence on the interior portfolio, but unfortunately his clear answer was the one-third-plus-one share,” the PM-designate said.

Stressing that his only goal is to “put an end to the collapse and the suffering of the Lebanese,” Hariri said he called on the President to “hear the pain of the Lebanese.”

“I asked him to give the country its last and only chance, through the formation of a government of specialists that would achieve reforms and halt the collapse, without obstruction or narrow partisan considerations,” the PM-designate added.

And responding to Aoun’s complaint that he has only presented “broad lines” for the cabinet line-up, Hariri distributed to reporters copies of the line-up he had submitted to the President on December 9, which contains the names and portfolios of the proposed candidates.

Hariri's remarks crushed hopes for a government breakthrough, as political leaders continue to wrangle over cabinet shares despite widespread anger at an economic crisis that has reignited street protests against a decades-old ruling class.

The outgoing government of premier Hassan Diab resigned in the wake of an August 4 explosion at Beirut's port that killed more than 200 people and ravaged swaths of the capital.

Lebanon's leaders have since traded blame for the government delay, with Aoun calling on Hariri to step down if he is incapable of forming a government suitable to all parties.

Hizbullah chief Sayyed Hassan Nasrallah, who is an ally of Aoun, has also criticized the hold up.

In a speech on Thursday, Nasrallah called on Hariri to abandon his push for a 18-member cabinet comprised entirely of technocrats.

"A government of technocrats that is not backed by political groups won't save the country," Nasrallah said, calling for established parties to also be represented.

In a report published ahead of Monday's meeting, the pro-Hizbullah al-Akhbar daily said there is "no hope for a breakthrough."

Lebanon is in the grips of its worst economic crisis since the 1975-1990 civil war.

More than half the population lives below the poverty line and the national currency has lost more than 85 percent of its value against the dollar on the black market.

The rapid currency plunge reignited street protests that started in 2019 but were temporarily snuffed out last year due to the coronavirus pandemic.

Demonstrators criticised officials for wrangling over cabinet posts instead of coming together to form a government capable of spearheading reforms long demanded by donors and the international community.

"There are no signs indicating we are heading towards a solution," Lebanon's French-language daily L'Orient-Le Jour reported on Monday.

"Talks are going in circles."

The international community has also denounced the performance of Lebanese officials.

French President Emmanuel Macron, who is leading the international charge against Lebanon's under-fire politicians, said last week he would push for a new approach to "prevent the collapse of the country".

The European Union and the United States should also ramp up pressure on Lebanese politicians, said a French diplomatic source, who did not rule out the possibility of sanctions.

"I want us to be able to discuss together the levers that would allow us to put pressure on the Lebanese authorities," he said in Brussels.

The one million plus Cedar Revolution II in July 2021 is getting closer to reality. One theme: UN Neutrality and no arms outside army.

Civilized world has won many battles for Lebanon's independence, from UN resolutions to Iranian sanctions. Our leaders starting from Traitor Aoun lost these won battles pushing Lebanon to the abyss. Cedar Revolution II will rise again in 2021 as in 2005. This time, no politicians needed. See you in July and next elections to restore Lebanon glory, prosperity, independence and freedom. The occupying Basij made Lebanese Shia, the most democratic Shia in the world, strangers to their own culture and traditions. Look at Yemen, Houthis kids are dying from hunger, malnutrition & sickness, but Houthis have ballistic missiles and guided planes under Iranian control! Is that the future o Lebanon? Iran criminal regime and Suleimani have poisoned all Shia crescent nations, creating desolate and isolate political, economic, intellectual, cultural and spiritually remnant of every country they touched. May God help Lebanon, Yemen, Iraq and Syria escape Iran’s kiss of death.

Cedar Revolution and Iran's Green Revolution are effectively the same and spring from the same source of freedom, democracy, dignity and tolerance. They should be invited to Cedar revolution II podium as we have the same march against the criminal Basij and the forces of darkness.

Hang them all NOW!

Hariri has to remember he was the one who made Aoun and his evil party President.

All this is theater staging. They dont want to form a government until subsidies finish and LBP drops.

Who wants to be prime minister on a falling LBP? Too much responsability.

He’s done and his in-law said he had nothing left to lose when the US sanctioned him... so he’s taking the country down with him. He must be secretly hoping that Biden will remove him from the list of criminals... typical FPM blackmail .

Aoun is manipulated by his son-in-law the evil Gebran Bassil. And Hezbollah is playing a nasty role behind the scenes.

I'm so glad to see that someone finally grew a backbone! But again, they are all regardless of their political affiliation a charade of a false democracy hiding the true leadership in Lebanon. The minute someone can get killed in Lebanon by a certain party member, and this party member and the party is held accountable I'll say there is an actual government in Lebanon, until than this is all an inconsequential dance.

Fingers crossed @gebran_sons that Hariri will maintain the resilience he has shown so far. Speaking as a Lebanese Christian, we're fed up with the notion of destroying Taef accord because of the inexcusable mind set of Aoun and Basil on rolling back time to a an era long gone. One, if truth be told, in which us Christians who were in power then didn't do good job of nation building and resource management which, while benefiting most Lebanese, neglected the fate of many others driving them to revolt.
History seems to be repeating itself today because our so called "leaders" never learn.

To boot, we have a dogmatic personality who's allegiance lies not with Lebanon but elsewhere forcefully subjugating the majority of us to the philosophy and aspirations of a foreign entity that have NOTHING in common with theirs.
So told me my father and so I tell my children. They shall never prevail.

it seems to me that the Prime Minister's position is cosmetic, after all, the president decides everything. It would be better to eliminate the PM position, decision-making will be easier