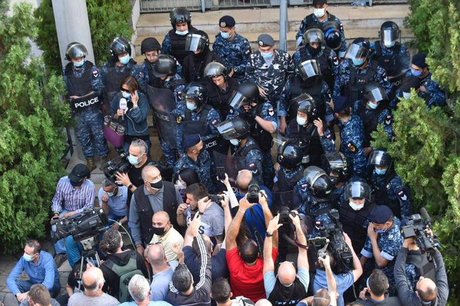 Mount Lebanon Prosecutor Judge Ghada Aoun managed Wednesday to enter the offices of the Mecattaf money exchange firm in Awkar, after bringing workers to break open a metallic gate, as minor scuffles erupted outside between her supporters and the Internal Security Forces.

Al-Jadeed TV said metal workers who left the firm confirmed that they managed to break open “the internal gate leading to the room containing the data.”

Lawyer and activist Rami Ollaiq, who has supported the judge in her actions and several raids on the firm’s offices, meanwhile told al-Jadeed that Aoun “has started a session for receiving the remaining data.”

According to the National News Agency, the judge left the company's offices in the evening, taking with her computers and files.

Earlier in the day, the firm had prevented the judge from entering its offices, arguing that she is not in charge of the file anymore, the National News Agency said.

Supporters of the judge had earlier removed an outer gate of the firm to help her get inside in her car, after which security forces arrived and pushed them away from the company’s premises.

The development comes a day after the Higher Judicial Council asked the Judicial Inspection Board to look into Aoun’s controversial actions while asking her to abide by the state prosecutor’s decisions.

The Council added that the Inspection Board will question Aoun over “her breach of the obligation of reticence, her failure to honor her repeated pledges before the Council, her refrainment from appearing before the public prosecution, and her stances and behavior after the state prosecutor issued a decision redistributing tasks at the Mt. Lebanon prosecution.”

The Council also reassured that any probe in any judicial file will be continued until the end by the relevant judicial authorities regardless of the identity of the judge in charge and regardless of any non-judicial considerations, urging all judges to “always honor their oaths” and to “respect the rule of law.”

Lebanon after Cedar Revolution in 2005 had 6% plus GNP growth after Syrian occupation ended and Beirut was again synonymous with freedom, sovereignty, liberal economy and prosperity. HizbIran 2006 War changed all that and we were faced with negative growth and high risk necessitating Central Bank monetary structures to stabilize the lira. Hizb War, occupation of a country, rockets at the service of a belligerent criminal Iranian regime and systematic destruction of all institutions put Lebanon on the road to bankruptcy and Iranian occupation. All productive investments stopped. Exodus of foreign firms. Educated people emigrated. Debt interest skyrocketed. None of this would be possible without Useful Idiot Aoun who sold Lebanon for 30 pieces of silver. The worst president in history of any nation. He is a premeditated assassin of a country and should rot in prison with all his enablers and crony judges.

Many Aounis will love to be described as such LOL.

Does anyone remember headlines in Lebanon this time last week? It was the fact that Michel Aoun had refused to sign the amended maritime border document that Lebanon needed to send to the UN. The true reason for this was that Aoun was going to use it as bargaining chip to protect his corrupt son in law from further sanction, when he meets with David Hale. A day later Ghada Aoun launches her circus act replacing him in the headlines.

She was replaced as a judge on the case, referred to the higher judicial council for disobeying orders; yet, she insists on breaking the law and presents a first class example of demagoguery FPM style. This is how the president and his 'reformist' party want to uphold the rule of law, implement reforms, and fight corruption.