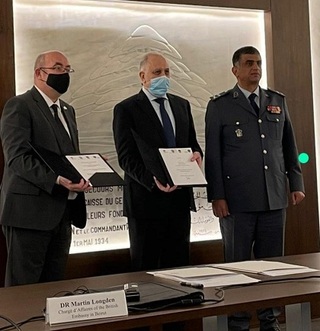 Head of the British Embassy Martin Longden signed a MOU with Lebanon’s Internal Security Forces leadership, and affirmed continuity of UK cooperation that anchors trust and strengthens the resilience of the ISF.

A press release issued on Thursday by the embassy stated:

Last Friday, Head of the British Embassy Martin Longden met with caretaker Minister of Interior Mohamed Fahmi and the Director General of the Internal Security Forces General Imad Othman to sign a Memorandum of Understanding that anchors the continuity of co-operation with the Internal Security Forces (ISF) under the British Policing Support Programme, worth £18.5m (2019-2022). The MOU signed during the ISF’s Strategic Programme Management Committee (SPMC) was in the presence of the UK’s Police Attaché Sally Hatfield, Elizabeth Greensides, Head of Conflict, Stability and Security Fund Lebanon Programmes and Sarah Kronfol, Head of Security Programme.

The MOU confirms the UK’s support and the MOI’s vision to strengthen the resilience of the Internal Security Forces to deliver internal security, community policing and service to all communities in Lebanon that anchors trust, respect for human rights, accountability and professionalism.

After the signature, Dr. Longden said:

‘Lebanon is passing through one of its toughest chapters in recent history. The multitude of current crises, and the lack of any political progress, are putting ever more pressures on public order and those tasked with maintaining it. We understand the importance of a modern, transparent and accountable police force for Lebanon, and value our partnership with the ISF as we work on this transformation agenda together.”