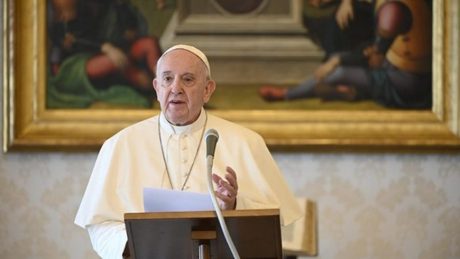 Pope Francis on Tuesday sent a letter to President Michel Aoun emphasizing that “Lebanon cannot lose its identity, nor the experience of brotherly living, which made this country a message to the whole world,” the Presidency said in a statement.

The Pope also renewed his desire to visit Lebanon “and its beloved people”, affirming his warm prayers that Lebanese maintain courage and hope, in the current ordeal they are witnessing.

In his letter, the Pope thanked Aoun for his congratulatory book on the occasion of the 8th year of his pontificate.

Pope Francis also thanked Aoun for the message which he had sent following his visit to Iraq, which included an official invitation to visit Lebanon.

Pope Francis raised prayers for God that “political officials (in Lebanon) work relentlessly for the common good in the land of the Cedars”.

“I entrust your dear nation to protect the Lady of Lebanon, asking the Prince of Peace to bless you and preserve Lebanon, and all its children” Pope Francis concluded.

His Holiness, Pope Francis not Michel Aoun, should tell the wannabe pope to stop listening to the pontifications of Salim Jarssati and get on with respecting the constitution that he vowed to defend. Yeah I know that's too much to ask of the corrupt demented senile deserter.

Very pleased that the Pope is concerned with what is happening in Lubnen. We cannot suffer this resistance axis any longer, if Hezb wants to fight the Sa’udis let them do it in Arabia, if they wish to fight the Jews let them go to Palestine. Why must Lebanon always suffer for these regional problems of deranged people? Lebanon is the haven for all Christians and Muslims of the region to live, not a battlefield for Iranis. Let Lebanon heal, we shouldn’t suffer while hezb bring the country to its knees and they haven’t touched an Israeli in 17 years anyway