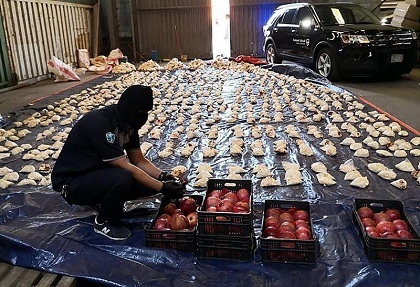 Mohamed Fahmi told local MTV television station during a tour to the Lebanon-Syria border that Interpol is also following a third suspect. He gave no further details, saying only that the case is still under investigation.

In late April, Saudi Arabia announced it had seized over 5 million pills of the amphetamine Captagon hidden in a shipment of pomegranates coming from Lebanon.

Fahmi said that 2,000 pomegranates out of about 80,000 in the shipment were filled with Captagon pills. "It is very difficult to find them without scanners," Fahmi said.

Asked if the Hizbullah group is involved, Fahmi said that according to his security information, they were not.

The United States had accused Hizbullah in the past of being involved in the drugs trade. The group strongly denies such charges.

The ban by Saudi Arabia came as Lebanon is undergoing its worst economic crisis in its history.

While Saudi Arabia has been a major supporter of Lebanon, the kingdom has also been locked in a regional struggle with Iran, the main ally of the powerful Lebanese group Hizbullah. Tension between the two regional powerhouses have often spilled into a deadlock in decision-making in Lebanese politics. Saudi Arabia is among the Gulf countries that imposed sanctions on Hizbullah.

Lebanon's Farmers Union called on the kingdom to repeal its decision. It said the mistake of one person or a criminal gang should not be a reason to punish the Lebanese people.

lol @ 'Asked if the Hizbullah group is involved, Fahmi said that according to his security information, they were not.'

As if he could say otherwise and stay alive.

It's Israel behind the drugged pomegranate. Hizb is always ashraf el nas and won't get financed by drugs.

That’s why not so long ago, I heard his subalterns call him Hassan Escobar.