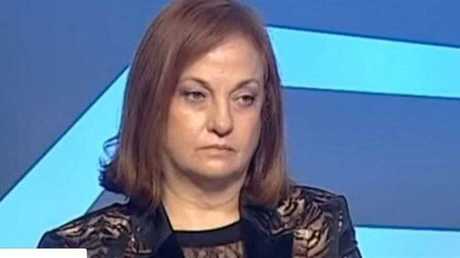 Mount Lebanon Prosecutor Judge Ghada Aoun on Wednesday raided the offices of the Prosec money transfer firm in Baabda, in a new development that follows her controversial raids on the Mecattaf cash shipping company in Awkar.

TV networks said the judge arrived at the company’s premises after an expert dispatched by her was denied access to the data.

Al-Jadeed TV meanwhile reported that Aoun was making phone calls to resolve the issue without calling in a metal worker to break the door open.

If the Devil had a wife, she’d look like that. She’s just pure evil!

Just imagine owning a small business that requires resources from outside (like every other company in Lebanon), and when the crash happened and the banks were trying to pretty much steal your money you tried to do the right thing and transfer your money abroad for your company survival. Good luck getting ANYONE to invest in a business venture in Lebanon for the foreseeable future.

Good luck getting ANYONE to invest in a business venture in Lebanon for the foreseeable future.
Does this include the quest for gas in the maritime region after an agreement with Israel?

Another Useful Idiot with assigned mission to destroy the banking and financial systems and destroy their reputation that took decades to create without benefiting a single depositor. Another marionette played by Hizb/Iran. Iran's plan enabled by its useful idiots. First occupying the South with FPM blessing to create an outpost for Iranian rockets. Then policy conversion to Iranian view on West and Arabs creating exodus of all international firms and tourism. Resulting political instability leading to high interests and deep deficits systematically destroying economy and its foundations. Once a failed state, attacking institutions such as education, banking and agriculture. Michel Aoun, Ghada Aoun and Bassil the key three Useful Idiots to implement Basij plan, justify occupation, create friction btw Christian and Sunnis and destroy all institutions. Lessons learned from how Basij destroyed the Green Revolution and Iran’s economy.

The $40 billion wasted on corruption by FPM energy ministers are sufficient to convert 100% Lebanon power to renewable energy saving precious foreign reserve, creating local jobs, reducing pollution and improving public health. With offshore wind power on Tripoli island and mountain top Lebanon would have free electricity for 30 years. Would this useful idiot Ghada Aoun investigate the biggest corruption ever in Lebanon's history and put Bassil and his cronies in prison instead of destroying Lebanese banking system to benefit a traitor president who willingly sold Lebanon for 30 pieces of silver and his criminal son-in-law, the real locust curse.

Would this Useful Idiot investigate the reasons for huge deficit, high interest rates & no growth since 2006 that forced banking into an inevitable losing game? After Cedar Revolution Lebanon has tiny debt after rebuilding Airport, Beirut & infrastructure; over 6% GNP growth insuring low interest, good investment environment and certain potential for tremendous growth & leadership of many sectors in the region... All changed with Aoun Faustian deal with HizbIran that enabled 2006 War, gradual occupation of HizbIran of all institutions by force of Iranian arms, and political instability that killed all investment, caused exodus of foreign firms, and led to stratosphere interests and debts that led us to the abyss. This is high treason!

Absolutely, but they aren’t alone although they play a big part in it.