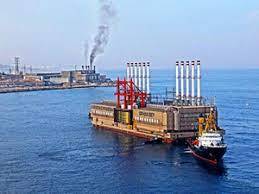 Lebanon’s Financial Prosecutor Judge Ali Ibrahim on Wednesday issued an order detaining the two Turkish power ships Fatmagül Sultan and Orhan Bey in connection with a suspected violation of the contract signed with the Lebanese state.

“Attorney General Judge Ghassan al-Khoury has informed the relevant ministries -- finance; public works and transport; and energy and water -- as well as the Electricite du Liban company and the Internal Security Forces, General Security, the Customs administration and the army’s Intelligence Directorate of… Ibrahim’s decision to detain the ships and prevent them from leaving Lebanon,” the National News Agency said.

Khoury also informed the Finance Ministry of another order issued by Ibrahim, which freezes any payments to the Turkish firm that owns the ships, Karpowership, to “guarantee the state’s rights as to the $25 million penalty clause should the payment of commissions be verified,” NNA added.

Two Lebanese suspects have been arrested on suspicion of being involved in the payment of a commission to secure Karpowership the contract with the Lebanese state.

I wonder to whom the commission was paid? Could it be to the FPM and its ministers who have been in charge of the ministry of power for the last 12 years?!

These two ships were and remain to this day the scam of the century.