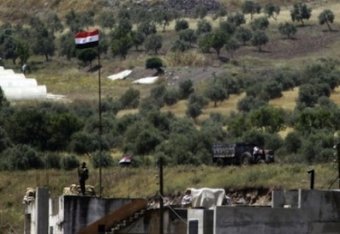 An Israeli airstrike overnight targeted a vehicle on the Syrian side of Lebanon’s border near the Lebanese town of Hermel, media reports said.

Al-Jadeed TV said a strong blast was heard at 3:30 am in the Syrian town of al-Jantaliyeh in Qusayr’s countryside after Israeli aircraft bombed a pickup truck.

Residents from the area said the powerful blast echoed across the towns adjacent to Hermel.

LBCI TV and Radio Voice of All Lebanon (93.3) meanwhile reported that the strike targeted “a vehicle used in smuggling,” causing only material damage.

The development came hours after three rockets were fired from south Lebanon toward northern Israel amid an escalating conflict between Israel and the Gaza-based Palestinian factions.

The Israeli army said those rockets landed into the sea.

Bomb Syria and hizbala and spare the Gazan population instead.

Why not both at the same time?

when wee will finish with israel your kind of people and those running this channel will be better to flee to europe or the us, your not difficult to retrace

Because the Gazawi population is innocent. Israel is bombing lots of civilians there and should stop doing so until it can surgically strike Hamas only.

phillipo, May you get back what you wish for the Palestinians, Lebanese and Syrians you terrorist supporter. Israel is the state of satan. 6 million jews killed in the holocaust and terror-loving zionazis like you learn nothing? You steal someone elses land and expel them and bomb children, innocents, homes, and hospitals while besieging these people who 80% are refugees prevented by your leaders from reteurning tp their lands in the 48 borders of palestine. You have crossed all lines. You even allow homosexual parades, prostitution and all sorts of sins according to the torah yet claim God gave you the land. What a joke. Wait for the response of God you subhuman worshipers of satan.

i.report - so when Hamas is sending over 1500 rockets into Israeli cities, killing and wounding civilians it is OK with you, they are not innocent. A 5 year old child, an 87 year old woman are amongst the dead, but with you this is OK.
Israel informs the inhabitants of the high rise buildings to leave their homes before they are destroyed, so don't blame Israel is they don't.
How can one surgically strike Hamas only, when they set up their rocket launchers in civilian areas and their bases in civilian buildings?

Pippo, I don’t see you crying for the Palestinian newborns and toddlers that are killed every single day in Palestine, yes, every single day! We Lebanese have a complicated relationship with both Palestinians and Israelis but we weep for the innocent victims of both sides.

1700 rockets were fired from Gaza, of which 30% crashed in Gaza, and most of the others were intercepted by the iron dome. My question to you is, how many rockets, missiles, shells, bombs were used by the Israelis since Monday? Why don’t you give me an answer, why doesn’t Israel advertise it? WHY!? A 3rd intifada was long overdue, but it certainly should also address the corrupt Fatah and terrorist Hamas issues.

I.report
Philipo is simply a propagandist. He is neither interested in peace or truth. He is interested in preserving the supremacist nature of the Israeli regime and he uses stock Israeli propaganda. He is not much different from the Hizb Iran supporters. They never for one minute stop and consider that that they are uttering is nonsense. Hamas may be a bad actor but Israel is on another level in its criminality.