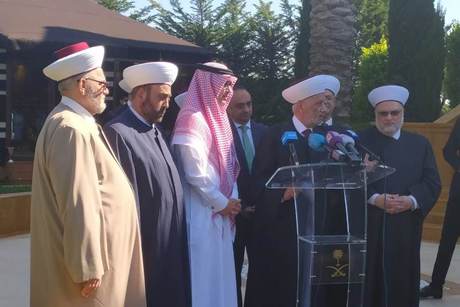 Lebanese officials flocked to meet Saudi Ambassador to Lebanon Walid al-Bukhari on Wednesday in a stand of solidarity, following televised remarks by Lebanon’s caretaker foreign minister, in which he suggested Gulf countries provided backing to extremists.

“We came to express our solidarity with the Kingdom of Saudi Arabia and with the rest of the GCC countries. These brotherhood countries have never abandoned Lebanon. What has been said is insulting to the Kingdom and the Gulf states, and also is an insult to us as Lebanese too,” Grand Mufti of the Republic Abdul Latif Daryan said after meeting Bukhari.

Bukhari said some decisive measures must be taken to “rectify” the mistake made by the minister.

“Decisive measures must be taken to correct the insults committed against Saudi Arabia and GCC countries. Lebanese officials must rush to heal this rift. Insults made are totally rejected and condemned,” he added.

Caretaker Interior Minister Mohammed Fahmi also met Bukhari. He said any apology for the insulting remarks "does not suffice for a mistake made by a foreign minister."

A delegation of the Progressive Socialist Party also visited Bukhari.

Wehbe's remarks to the U.S.-backed Alhurra news channel caused a firestorm in Lebanon and among Gulf countries. They came amid already tense relations between Lebanon and traditional ally Saudi Arabia. Only last month, Saudi Arabia banned produce from Lebanon after unveiling a large shipment of amphetamine pills smuggled inside pomegranates.

In remarks late Monday, Wehbe said “friendship and brotherhood countries” brought Islamic State militants to Syria, Iraq and Lebanon. When asked if he meant that Gulf countries financed IS, he retorted sharply: “Financed by me then?”

Wehbe apologized over the remarks saying his “inappropriate words” were voiced as he was irritated and rejecting “unacceptable insults addressed to the President” during the TV talk show.

Wehbe early on Tuesday announced in remarks from Baabda Palace after meeting President Michel Aoun, that he was stepping down from his post.