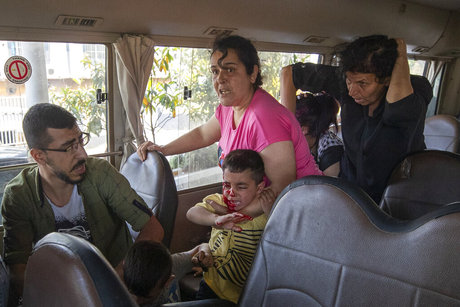 Lebanese mobs attacked buses and cars carrying Syrian expatriates and refugees heading to the Syrian embassy in Baabda on Thursday, protesting against what they said was an organized vote for President Bashar Assad.

Scattered mobs of anti-Syrian Lebanese, most of them from the Lebanese Forces party, waited for convoys of cars and buses carrying Syrian voters at intersections in Beirut, outside the capital and in the eastern Bekaa region. They pelted them with rocks and smashed windows with sticks. In one incident near Nahr el-Kalb on the highway north of Beirut, one attacker poked a wooden stick inside the car, poking the driver as others smashed the windshield.

A 54-year-old Syrian man died from a heart attack aboard one of the buses, the state-run National News Agency reported without providing additional details.

Buses carrying hundreds of voters featured pictures of the incumbent president on the windows.

"They don't need to carry pictures and flags for an absurd criminal regime," said Fadi Nader, one of the protesters. "If they want to vote, they can go home and vote there... Since they love Bashar Assad, why don't they go home?"

"I cannot find any justification for the attacks against the buses transporting the Syrians," he told reporters.

LF leader Samir Geagea said Wednesday that the thousands of Syrians who are voting for Bashar Assad are clearly not fearful of his government and don't seem to be refugees afraid of returning home. He called on the government and president to arrange for their return to Syria "immediately."

Lebanese Army soldiers stood guard as Syrian citizens who live in Lebanon queued outside their embassy in Yarze, east of Beirut, to cast their ballots. Some shouted slogans in support of Assad as they waited.

"The Syrians that want to vote for Assad inside Lebanon are supporters of the regime ... so they should go ahead, pack their things and return to their land," one post said.

In one video, no fewer than six men surround a vehicle and kick through its windshield while beating up passengers inside.

Lebanon is home to over 1 million Syrians, making it the country in the region hosting the largest number of refugees per capita. Their presence -- nearly one Syrian for every four Lebanese -- has weighed heavily on Lebanon's infrastructure, and resources, particularly as the small country reels under an unparalleled economic crisis.

But calls for the return of Syrians home have also been a widely politicized issue among Lebanese who have been deeply divided over the 10-year Syrian conflict, with some supporting Assad and others backing his opposition.

Even before the conflict, Syria's role in Lebanon was deeply divisive. Syrian troops were deployed in Lebanon in 1976 shortly after the civil war broke out. They only pulled out in 2005 following a popular uprising that followed ex-PM Rafik Hariri's assassination and a U.N. resolution, after a 29-year domination of Lebanese politics.

The Syrians living in Lebanon find themselves in a hard spot.

The United Nations agency for Refugees, UNHCR, said it has received reports from registered Syrian refugees that they were pressured before the elections to cast their vote -- including threats of physical harm or confiscation of documents. It was not immediately clear who was behind the threats. The agency's spokesperson Lisa Abou Khaled said they are following with relevant stakeholders to ensure the refugees are free to vote.

Assad has been in power since 2000 when he took over from his father, Hafez, who ruled before that for 30 years. Despite the war, which seemed at one point to threaten his rule, Assad remained in power, supported by regional powerhouse Iran and Russia.

The armed conflict has subsided in recent years, but Syria remains torn. Thousands of foreign troops are based in different parts of the country. The elections are not taking place in at least four provinces because they are under the control of the opposition and Kurdish forces, depriving nearly 8 million Syrians of a vote.

The Biden administration has said it will not recognize the result of Syria's presidential election.

Syria has been in the throes of civil war since 2011, when Arab Spring-inspired protests against the Assad family rule turned into an armed insurgence in response to a brutal military crackdown. Around half a million people have been killed and half the country's population displaced.

"Buses carrying hundreds of voters featured pictures of the incumbent president on the windows."

You love Assad so much, go and honor him in your country! Why do you call yourself refugees if you support Assad and if you return you have nothing to fear!!!

Get out of my country now!

I doubt it very much

Excellent point you made there.

Picture of criminal Assad or not. No excuses. This is unacceptable. If we have not yet learned what Basic Human Rights mean we don't deserve a country nor calling ourselves civilized.

If we had capable foreign ministers instead of the corrupt Useful Idiots, we should be paid by European Union billions of dollars the equivalent of $100 per Syrian refugee per day for every day they are hosted in Lebanon. Money taken directly from from Syrian rebuilding fund. This is what Turkey is getting paid and it is still much cheaper that what every refugee cost in Europe. This is our right and will make sure Assad would want them back as soon as possible. Unfortunately we only have incompetent mafia politicians.

Is that kid bleeding in the picture?

This is how the shabbiha behave. The assadists can't condemn this without being hypocrites. And LF supporters should not pretend to be better than them nor more civilized. This is how thugs behave and this is why it is ridiculous to pretend to be for change while supporting the same kind of political parties and militias that were part of the lebanese civil war. Saying but they do the same thing or worse is not a good defence when you are comparing yourself to thugs. And yes bassil is a hypocrite and yes it is bizarre to vote for assad while still being a refugee in lebanon. It could also be that they vote for him because their mukhabarat will cause trouble for them or their families in syria if they don't.