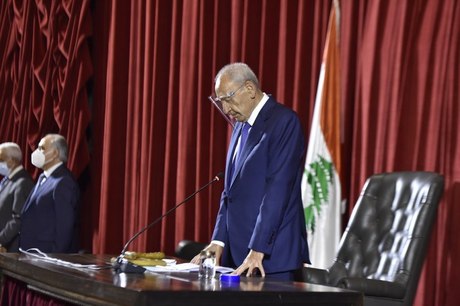 Speaker Nabih Berri on Saturday presided over a parliament session dedicated to discussing President Michel Aoun’s letter on the issue of the new government and the mission of PM-designate Saad Hariri.

State-run National News Agency said a large number of lawmakers were taking part in the session.

The letter was recited Friday in parliament before Berri adjourned the session in a bid to defuse tensions between the camps of Aoun and Hariri.

Speaking at Saturday’s session, MP Mohammed Raad, the head of Hizbullah’s bloc, said the priority now is for the formation of a new government.

The priority is for “exchanging concessions for the sake of our country,” Raad added.

What a sad, pathetic and pitiful show they put on.

Michel Aoun knew nothing about this letter. As Aoun was asleep as per his usual, Bassil trying to be cute told Jraisaty to send the letter, now back to the regularly scheduled grandstanding.