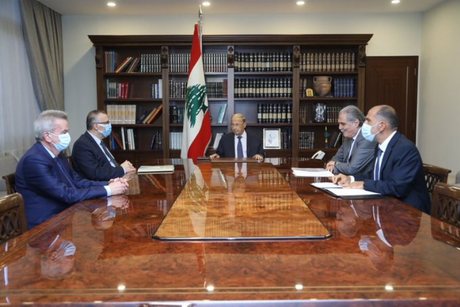 President Michel Aoun was on Thursday meeting with Central Bank Governor Riad Salameh and State Shura Council head Judge Fadi Elias after the Central Bank froze a circular allowing depositors to make use of their USD accounts at the LBP 3,900 rate.

Al-Jadeed TV reported that Aoun had made contacts overnight that led to the reversal of the bank’s decision and that the outcome would be announced after Thursday’s meeting in Baabda.

Scores of Lebanese had lined up in front of ATM machines overnight, after the State Shura Council -- a top Lebanese court -- suspended a Central Bank decree that allowed them to withdraw from dollar deposits at the LBP 3,900 rate -- a rate two and a half times better than the fixed exchange rate.

In a late night burst of anger, protesters blocked main roads in Beirut and north of the capital.

A young activist told a local TV station the protest was against the constant humiliation of Lebanese who line up to fill their cars with fuel, increasing power cuts, search for medicine and deal with confused banking decisions that are robbing thousands of their savings.

The financial crisis has driven more than half of the population into poverty, caused the local currency to lose more than 85% of its value, and prompted banks to lock deposits through informal capital controls, eroding trust in a once-thriving banking sector.

The State Shura Council on Tuesday ordered the temporary suspension of a Central Bank circular that gave depositors a chance to withdraw at a rate better than the pegged rate.

The Central Bank announced late Wednesday it was accepting the decision, prompting the queues outside ATMS. One man said he went from one ATM to another to withdraw as much as he could. Another complained that people's savings are at the mercy of corrupt politicians.

"This is not resilience. We got used to being humiliated and controlled this much by the politicians," said Mustafa Taqoush, a 23-year-old who failed to withdraw more than a weekly limit imposed on withdrawals.

Blatant interference by Aoun in the judiciary and its decisions!!!