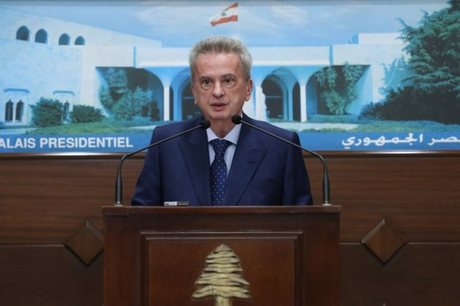 The bank’s decision had suspended a circular allowing depositors to withdraw from their dollar accounts at the LBP 3,900 rate -- a rate two and a half times better than the fixed exchange rate of LBP 1,500. The suspension had sparked an uproar and street protests.

The bank’s suspension of the circular had followed a State Shura Council decision that deemed the LBP 3,900 rate as illegal after a lawsuit was filed in this regard.

Salameh announced Thursday that the Central Bank has decided to reverse its decision in light of the fact that it has not received an implementable version of the Council’s order. He also said that the bank has filed an appeal before the Council that “included new elements that weren’t before in the file.”

Salameh also reassured that “Lebanon is not bankrupt” and that “the money of the Lebanese is in banks and a circular will soon be issued to return the money to the Lebanese.”

He also stressed “the need for cooperation between the Central Bank and the State Shura Council for the sake of Lebanon’s interest.”

More BS to avoid riots.
Of course that Lebanon is Bankrupt!

If we are not bankrupt... how come we cannot pay for the STL? lol

or default on the eurobonds

the STL joke is the least of our concerns today

That's not the point Aboudi.

Corrupt to the bone

How close to death has the system pushed riad salamieh? he knows what he's doing. He is an emminenent int'l banker. Let him run the Lebanese banking system as it knows best since the 1950's. It will save the country from total financial disaster. lay off and trust in his judgement.