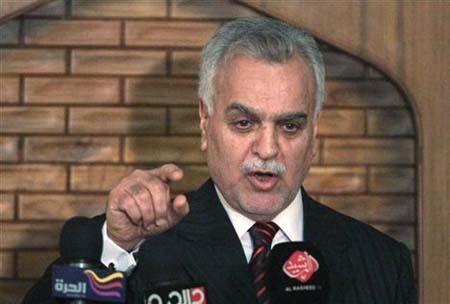 Two women employed by the office of Iraq's fugitive vice president Tareq al-Hashemi have been detained by security forces and may be at risk of torture, rights group Amnesty International said.

Hashemi, a Sunni, has been accused of running a death squad, a charge he denies. He is holed up in Iraq's autonomous Kurdistan region, which has so far declined to hand him over to the central government.

"One of the employees, Rasha Nameer Jaafer al-Hussein, was arrested from her parents’ house in Baghdad’s Zayouna district on 1 January without a warrant," Amnesty said in an online statement on Friday.

"The other employee, Bassima Saleem Kiryakos, was arrested on the same day after her house in the Green Zone in Baghdad was raided by over 15 armed security men wearing military uniform. The officers did not have an arrest warrant," it said.

Kiryakos had already been arrested, beaten and released after three days shortly before her current detention, according to Amnesty.

"Amnesty International fears both women may be at risk of torture or other ill-treatment. It is believed their arrest is in connection with an arrest warrant against... Hashemi," it said.