Report: Fears of U.S. Sanctions after Nasrallah’s Bid to Import Oil from Iran 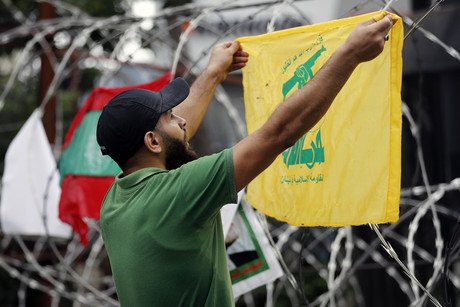 Hizbullah chief Sayyed Hassan Nasrallah’s latest remarks about the party’s readiness to rely on fuel imports from Iran if the Lebanese state fails to take action, raised concerns of U.S. sanctions on the crisis-stricken country, media reports said on Thursday.

Since 2018, Washington has imposed sanctions on anyone who knowingly enters into deals with Iranian oil companies in order to buy, possess, sell, transfer or market petroleum or petroleum products from the Iranian authorities.

On Tuesday, Nasrallah said if the Lebanese state fails to take action, "we, within Hizbullah, will go to Iran, negotiate with the Iranian government... and buy vessels full of petrol and fuel oil and bring them to Beirut port.”

"Let the Lebanese state (dare to) prevent the delivery of petrol and fuel oil to the Lebanese people!" he said, adding, "We can no longer tolerate these scenes of humiliation."

Lebanon has been facing increasingly severe fuel shortages in recent months, with long queues at service stations and some drivers waiting more than an hour to buy even small quantities of supplies.

Describing the situation as humiliating, Nasrallah called on authorities to take a "courageous decision" and override their "fear" of the U.S. to import fuel supplies from Iran, a country under hefty American sanctions.

According to Paul Morcos, the head of Lebanese law firm Justicia, “American laws prevent the import of oil from Iran; this would expose Lebanon, if Nasrallah does what he announced, to U.S. sanctions,” he told Asharq el-Awsat newspaper.

On the other hand, MP Fares Soaid, head of the Our Lady of the Mountain gathering told the daily: “The danger of his speech is not in its literalism, but in declaring that the Lebanese state does not exist, and is not protected by law and the constitution, as if there is no president of the republic in Baabda."

Conflicting reports emerged Wednesday evening on whether or not the current government formation efforts have made progress.

Does anyone sane enough believe that HN would buy oil from Iran and bring it to Lebanon? Hassan is acting like a king of Lebanon and all others, from Aoun down, are his subjects. I say good for him for having such people under him. I guess as Christians, and myself one, we should kiss Lebanon goodbye, even before Aoun leaves presidency. Only if he dies, would Lebanon have any hope in survival! After all, he surpassed the Lebanese mortality rate by 15 years, and his end naturally is within days or weeks. I am one of the Christians who would make a party when this guy vanishes. I am waiting for this moment like crazy to celebrate.

Christian or not, most Lebanese will celebrate his violent and brutal murder. I’ll be dancing naked on the tables on that day.

I am not talking about Hassan; I am talking about Aoun who is so old which means his natural death could certainly happen within days or weeks, which also means, he would not be able to continue his tenure as a president. Hassan is still young and as a Christian I wouldn't like him to be murdered or killed. He believes in something and we need to convince him that his way is not the right way. We shouldn't be like him killing anyone who disagrees with his stances.

I am talking about Aoun and not HN. However, I don't believe in killing or violence. God has better way to sanction these devils. I am one of those who would celebrate the moment I know that Aoun died of old age. I am praying day and night for God, or more so, through the devil, as he would definitely be with the Devil when he vanishes, to take him from us. Please God do that immediately, or very soon, as Lebanon couldn't afford having this man on top not even for a second.

What does it matter? The U.S is already sanctioning Lebanon.
Look at the economy already, we have United States to thank for that.

Really? What are the sanctions U.S. you are speaking off? Food, Oil, Medicine, basic human needs? - please share with us your proven information. Most of the smuggling is happening to Syria and HA is assisting since it controls the army and borders, am I mistaken?

"The U.S is already sanctioning Lebanon"

The U.S has nothing to do with Lebanon's economic woes. Can you send and receive money by Western Union? Can you import fuel and American made cars? Can you buy McDonald's? Stop your Iranian BS and you have no one to blame except your terror group Hezbollah for Lebanon's demise. You breed corruption, drugs, and terrorism.

Before he starts importing fuel from Iran, shouldn't the terrorist stop his group's smuggling of fuel and subsidized goods to Syria?

Let’s hope their ships will be sunken before they reach the Mediterranean. We don’t need Iranian terror oil, they’re largely responsible for the collapse and bankruptcy of our country.

My power plants in jounieh, zahle, jiyye, Zohra I just to name a few?

What is Lebanese about the Iranian owned and operated terror group?

According to his logic, anyone can get what they want from where they want. Like medicine from Israel?

What Nasrallah was actually suggesting is to pay the Iranians in LBPs so they can send them back to Lebanon exchange them for US dollars which they need. Help Iran, screw Lebanon, win win for Haᛋᛋan. But who can doubt that Hezbollah can bring ships to the port of Beirut without the consent of the Lebanese government that's what they did when they brought the Ammonium Nitrate for Bashar Assad's barrel bombs. Help Assad, screw Lebanon, win win for Haᛋᛋan.

He is threatening the state now: "Let the Lebanese state (dare to) prevent the delivery of petrol and fuel"
Need we say more...?

He is the State!

Yes. He is the state.

The hero from Britain has spoken!

Isn't Hizbos money from Islamo Fascist Republic of Iran. So how is is buying from them with what money?

Threatening the state? He is the state. There is no Lebanon. he effectively is the defacto ruler.

I am truly convinced unlike most of you, there is no salvation for Lebanon. Lebanon was ended they day that Cairo Agreement was signed in 1969

How long will Lebanon and the Lebanese people continue to be enslaved by the Israeli lobby that occupies America?

The real enslavement is to the backwards gangsters and iranian / syrian interests. Look how backwards we have become compared to Israel's economic development. And they have the audacity to proclaim themselves winners...
Lebanon should have rule of law, security and freedom from outside interests so that our valuable intellectual capital can help rebuild this nation.
Surprise surprise, we are following all the backwards regimes with their outdated politics into poverty and oblivion.

Do you mean enslaved by Iran and HA? We don't know yet