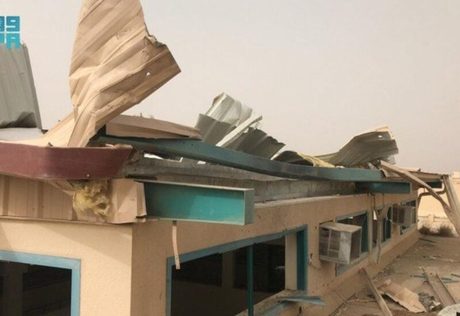 A bomb-laden drone launched by Yemen's Huthi rebels crashed into a Saudi school on Sunday, state media said, despite growing diplomatic efforts for a ceasefire between the warring parties.

Photos released by SPA showed the damaged roof of a building as well as what appeared to be broken parts of the drone.

The reported attack comes three days after the Saudi-led coalition fighting the Iran-linked rebels said it had stopped carrying out attacks in Yemen in order to pave the way for a peaceful settlement.

The de-escalation is aimed at "preparing the political ground for a peace process in Yemen", coalition spokesman Turki al-Maliki told Saudi state television on Thursday.

But shortly after his comments, Yemeni state media reported that at least eight civilians had been killed and 27 others wounded in strikes in the northern city of Marib.

The Huthis have led a months-long offensive to seize Marib and its surrounding oil fields -- the last significant pocket of government-held territory in the north.

Earlier this month, Omani officials visited Sanaa to try to convince the rebels to accept a ceasefire, according to rebel sources.

The effort to secure peace in Yemen comes after Saudi Arabia and regional rival Iran restarted talks in April, with their first high-level meeting since Riyadh cut diplomatic ties with Tehran in 2016.

Saudi Arabia leads a military coalition that intervened in the Yemen conflict in 2015, to support the internationally recognised government.

The UN says Yemen is suffering the world's worst humanitarian crisis as its years-long war rumbles on, with tens of thousands killed, millions displaced and two thirds of its 30-million population dependent on aid.

Once, I lived and worked in Yemen with a multinational company for a terse period. Yemen is one of the poorest, if not the poorest, in the world. Its people are fanatics in a stupid way, and certainly not in a spiritual way. I simply believe the Yemenis worship the devil, despite claiming to worship God. They are all uneducated, more than half of its people are unemployed, and those employed, are drastically poor, and all of them, including their leaders, consume "Kat" daily - Kat being a plant that has the same effect of cocaine. They are all high all the time, while all of them hold guns on the streets, in the cars and everywhere. Having said this, I really wonder why are they attacking the kingdom of SA, when most of their investments come from the there? Amazingly, Lebanon is falling down speedily and might become like Yemen one day, thanks to Iran which makes every country they tamper with poor and unstable.