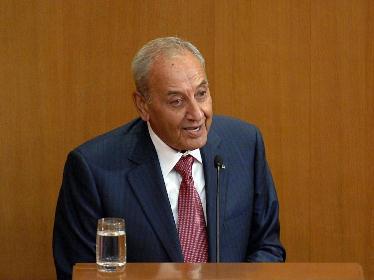 Parliament Speaker Nabih Berri on Wednesday lashed out at the Presidency, after it accused him of interfering in the cabinet formation process.

“The decision to designate a premier does not stem from the will of the president but rather comes from the decision of the MPs, or the legislative authority,” Berri said in a statement.

“The person who carries out the parliamentary consultations to form the government is the PM-designate, according to Article 64 of the constitution, and accordingly I have the right, based on the PM-designate’s request, to try to help him in any initiative that he might find,” the Speaker added.

Reminding that PM-designate Saad Hariri had agreed to increasing the number of ministers to 24 and to the solution reached for the interior portfolio, Berri said President Michel Aoun complicated things anew by “insisting on 8+2 ministers to be named by the president, who is constitutionally not entitled to even a single minister.”

“In your statement yesterday, you openly said that you don’t want Saad Hariri as premier. This is not your right, the decision of his designation did not come from you, and parliament voiced a resounding stance in its response to your letter,” the Speaker added.

“A solution is needed… and the initiative will continue,” Berri went on to say.

“insisting on 8+2 ministers to be named by the president, who is constitutionally not entitled to even a single minister.”

The constitution is crystal clear about government formation. For argument's sake let's say the president names 10 ministers in a 24 minister cabinet. When the government underperforms and loses a vote of confidence in Parliament it automatically resigns including the prime minister. However, the president who named 10 minsters in the same cabinet remains President and is beyond accountability for the actions of the ministers he named !!!! That is how Aoun interprets the Constitution...

wow, that was an excellent point indeed!! If presidents like Aoun insist on naming ministers in any government then it goes without saying the president should also resign when the government loses the parliament's confidence or resigns.

This Aoun and Basil, who are one meter tall, are violating the constitution and should be deposed - yes deposed. Aoun entered the army threw cheating as no officer is allowed to enter the army unless he's tall, and because Aoun is a dwarf, how on earth did he enter the army? This should be examined for cheating. Anyhow, it's too late as this Aoun is simply days away from death. The day this nut-head dies would be the day we all should celebrate as being a new liberation day for Lebanon.

Whoever came up with the presidential share BS a few years back poisoned Lebanon and our lives for good. As we all know, what once was done as a courtesy is not a legal nor moral obligation.

A March on Baabda will be inevitable to unseat the despot king.