Iran Embassy Hits Back at Shea over Oil Ships 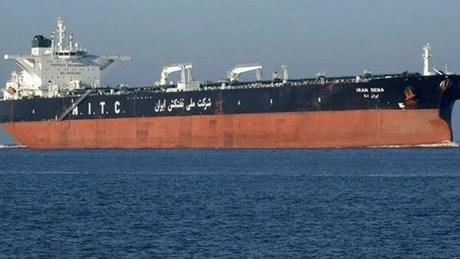 The Iranian embassy in Lebanon on Saturday lashed out at U.S. Ambassador to Lebanon Dorothy Shea over remarks related to Hizbullah chief Sayyed Hassan Nasrallah's call for buying fuel from Iran.

"The arrival of Iranian oil tankers in Beirut is not hinging on the trifles of U.S. Ambassador to Lebanon Dorothy Shea," the embassy tweeted.

"The ambassador should not interfere in the brotherly relations between the two countries and between the Iranian and Lebanese peoples," the embassy added.

The tweet included a file photo of an Iranian oil tanker.

Sources meanwhile told al-Jadeed TV that the tweet was a "political response" to Shea's remarks and does not signal the actual arrival of any Iranian ships in Lebanon.

Shea had on Friday said that the import of fuel from Iran is "really not a solution" for crisis-hit Lebanon.

"What Iran is looking for is some kind of satellite state that they can exploit to pursue their agenda,” Shea said.

“There are other alternatives to provide fuel and electricity to the Lebanese people,” the ambassador went on to say, noting that eradicating corruption is one of the solutions.

“There are much better solutions than turning to Iran,” she added.

Embassy of Iran responding to the ambassador of the USA in Lebanon. What a crap country have we turned into. Just deport this asshole from Lebanon and let him take Nasrallah with him. After all, Nasrallah is living underground with the rats scared for his life from Israel. In Iran, he would have more protection and can life like a normal person. If also possible, ship all the Shai who love Iran more than Lebanon. Iran deserves such people's loyalty, Lebanon doesn't need them.

That picture of the oil tanker is the only fuel Iran will ever supply Lebanon with. If Nasrallah still insist on Lebanon buying fuel from Iran this photo is available in color and in black and white frame extra.

From the photo, that tanker is empty. Look at the water line!! :-)

Maybe it’s on its way to Lebanon to pick up subsidized fuel and take it to Syria!!

Iran is a pariah- it is an anaconda waiting to constrict the hapless Lebanese Shiites who depend on it. Iran should have been nuked off the face of this planet. Too bad Trump did not do it.