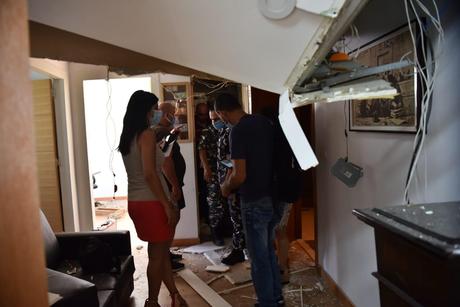 A blast rocked the office of the lawyer Sakhr al-Hashem in Furn el-Chebbak on Monday afternoon, causing material damage.

The lawyer, who was at the office at the time of the incident, escaped unharmed along with his two sons who work with him.

Speaking to a-Jadeed TV, al-Hashem said it is unlikely that the explosion was caused by gas or electricity.

The lawyer is known for handling controversial cases and he is the counsel of one of the detainees in the case of the Beirut port blast.

In his remarks to al-Jadeed, al-Hashem hoped the incident is not a “message,” describing the explosion at his office as “very, very, very violent.”

MTV meanwhile reported that the blast was caused by an electric "water heater."

Another act of huzbullah. They killed the Shai Journalist "Lukman sleem", and were directly responsible for the Blast at the port. That why Aoun doesn't want to deal with it. Aoun tells Huzbullah he will support their arms, in return for Huzbullah letting him and his SIL basil steal the riches of Lebanon. It's a known formula that worked. That's why Lebanon is now bankrupt.