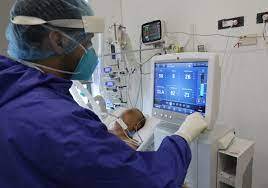 Hospitals in crisis-hit Lebanon have warned of a looming "catastrophe" as some were only hours away from running out of fuel to keep life-saving equipment on during endless state power cuts.

Lebanon's worst financial and economic crisis ever is battering an already fragile health sector as it faces the latest wave of the coronavirus pandemic.

The state electricity supplier has all but stopped supplying power in recent weeks, forcing homes, businesses and hospitals to rely on backup generators almost around the clock.

But the syndicate of private hospitals on Thursday warned they were struggling to procure enough fuel to keep theirs on.

"Hospitals are unable to find fuel oil to power generators during power outages of at least 20 hours a day," it said in a statement.

"A number of hospitals risk running out in coming hours, which will put the lives of patients in danger," it warned, without specifying how many facilities were at immediate risk.

The syndicate called on officials to "immediately work to solve the issue to avoid a health catastrophe."

As foreign reserves plummet, the Lebanese state is struggling to buy fuel for its power plants, increasing electricity cuts to up to 23 hours a day in some parts of the country.

The crisis has caused the local currency to lose more than 90 percent of its value, and forced hundreds of thousands of Lebanese with drastically reduced incomes to contend with shortages.

Earlier this month, medicine importers said they had run out of hundreds of essential drugs because the central bank had not released the promised dollars to pay suppliers abroad.